UPDATE: This statement was released at 10pm on Thursday Sept 3, 2020. It was subsequently reported at about 11:30pm that Michael Forest Reinoehl was killed in an encounter with authorities. Such forceful action by Police was no doubt undertaken due to increasing fears of a massive public backlash over unchecked anarchist violence. The biased and politically motivated behavior of the media in selectively granting Reinoehl a platform with which to spread his message of hate and violence, while silencing, mischaracterizing and ignoring pro-White and Right-wing voices, continues to be unacceptable.

It seems that in America today there is no political or moral outrage that goes too far for the mainstream media. Thursday night on the VICE News Network, Michael Forest Reinoehl, the man who allegedly murdered Aaron Danielson in Portland on August 29th, gave an interview in which he defended his actions and brazenly lied about the incident. In the short advertisement for the interview Reinoehl claims, with no evidence, that his actions were in defense of “a friend of mine of color.”

A video of the shooting has been widely circulated online. VICE even includes a clip of the video in the advertisement for the interview with Reinoehl. There seems to be agreement by all parties that the video is authentic and Reinoehl is the shooter.

While it is difficult to see exactly what is going on in both the normal speed and the slowed down versions of the video below, it does not appear that there is another person, “of color” or otherwise, near Danielson when a man, presumably Reinoehl, approaches and shoots him. Danielson then staggers and falls to the ground. At that point a White man, reportedly a friend of Danielson, appears and tries to render aid. So where then is this mysterious “friend of color” that Reinoehl refers to?

Not only is there no sign of said “friend of color,” reports of the immediate aftermath of the shooting do not make any mention of a weapon found on Danielson’s body or anywhere in the vicinity of the incident. According to some reports, Danielson tried to defend himself by spraying pepper spray. These facts only further undermine Reinoehl’s already dubious claim of self-defense.

It is noteworthy that Reinoehl emphasizes that he was defending someone “of color,” despite no such person being evident in the video. The clear implication is that people of color have higher moral stature than Whites and are more worthy of defense. Extreme racial hatred and dehumanization of White people is one of Antifa’s calling cards. Antifa members often make anti-White statements online and target Whites and White advocates for harassment on a racial basis.

Reinoehl has previously made violent and extremist statements online. In the below Instagram post from June 16 he announces his affiliation with Antifa and calls for political violence. 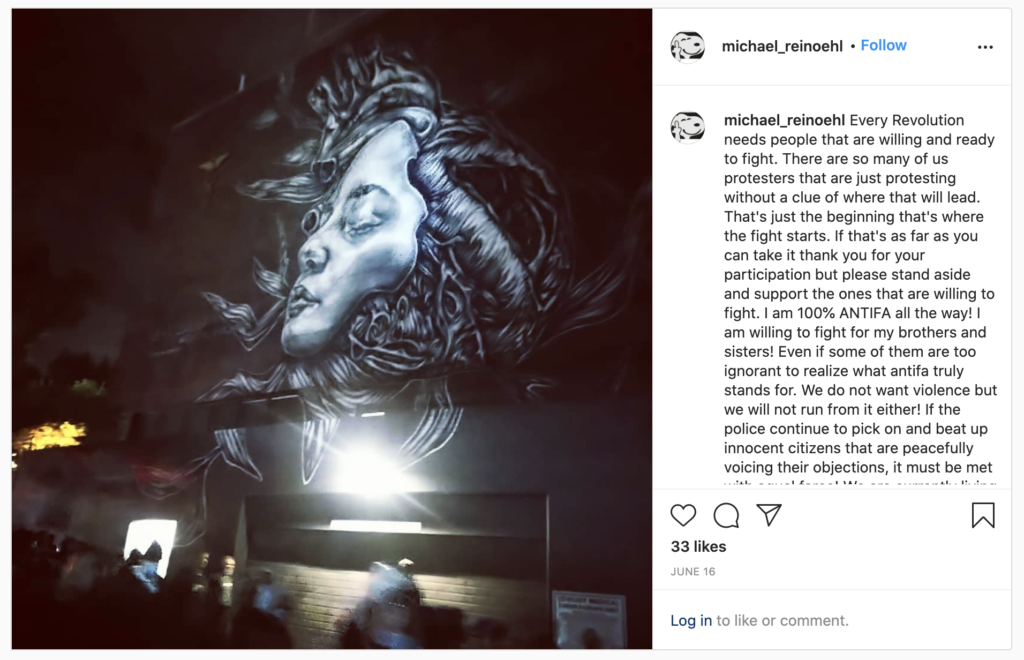 Contrast the treatment of Reinoehl, who by all appearances shot a man with no provocation, with that of model citizen Kyle Rittenhouse who acted heroically in self-defense when attacked by three criminals, one of whom was a child rapist. Thumbing their noses at the massive grassroots support for Rittenhouse, the mainstream media has done nothing but condemn and slander him. Politically motivated prosecutors have wasted no time in maliciously overcharging him with 1st degree intentional murder. Reinoehl, on the other hand, has been treated with kid gloves by both cops and media. Unlike Rittenhouse, he is being allowed to walk free and given a platform to make political statements, despite the widespread and justified outrage of the public at his actions. The Portland Police have refused to say whether he is even a suspect in the shooting.

The cases of Reinoehl and Rittenhouse are polar opposites in all respects. When Rittenhouse was arrested and maliciously overcharged, the NJP warned that this sent a green light to anarchists that they have permission to physically attack White people. Reinoehl apparently received that message loud and clear. Even more outrageously, Reinoehl is so confident that he is backed by wealthy and powerful interests that he feels comfortable going on TV and bragging about his deeds. The message to White people in America could not be clearer. The system wants you dead and will not lift a finger to protect you, but if you dare to defend yourself, prepare to be slandered in the media and face criminal charges.

This situation is intolerable.

The National Justice Party demands the immediate arrest of Michael Forest Reinoehl on charges of first degree murder. Given Reinoehl’s brazen admission to the crime on national TV, the Police have no more excuses for inaction. By allowing Reinoehl to walk free, the government is effectively declaring open season on Whites and granting anarchists tacit approval to commit more racial and political violence against White people in America.