Since declaring Joe Biden the victor in the US Presidential election two weeks ago, the US media has been heaping praise on his picks for top cabinet positions. Catchwords such as “competence,” “moderation,” “tact” and “professionalism” are being bandied about by pundits to describe the next President’s selections. A narrative of Biden and his administration being a fountain of wisdom and generosity is being actively constructed.

Ted Kaufman, the Jewish head of Biden’s transition team, said this about the team’s supposed commitment to diversity: “As we continue working full-speed ahead to Inauguration, our diverse group of leaders and staff are reflective of America — upholding President-elect Biden and Vice President-elect Harris’ belief that through diverse voices we can develop and implement a policy vision to tackle our nation’s toughest challenges.” For his part, Biden promised to build a “diverse” cabinet that “looks like America,” but so far it looks a lot more like Israel. Despite being only 2% of the US population, Jews constitute over 75% of announced cabinet picks in the incoming Biden administration.

As White Americans, who constitute roughly 60% of the US population, are systematically excluded from low and mid-level government jobs because of diversity policies, six out of eight appointees to the most powerful positions in the government all belong to the same racial group. The media refuses to discuss the Jewish roots of these individuals, and perpetuates the outrageous lie that this cabinet somehow “looks like America” or represents “diversity.”

The Republican Party will say nothing about the extreme Jewish takeover of the Biden administration, because the Republican Party is also financed by powerful Zionists like Paul Singer, Bernie Marcus, Sheldon Adelson and Stephen A. Schwarzman. While fake controversies are stirred up by both sides over supposed “Russian” or “Chinese” influence, total Jewish-Zionist control over foreign, economic and national security policy is being installed in plain sight, and not one Democrat or Republican has the courage to say anything about it. Far from being diverse or progressive, Biden’s appointees represent a stinking cesspool of Deep State corruption, plutocratic-establishment privilege, Jewish nepotism and tribal loyalty to the state of Israel over and above America. 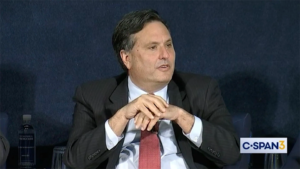 Biden’s first appointment to the vital position of Chief of Staff is the Jew Ron Klain. Much like his predecessor Barack Obama, whose first act after winning the 2008 presidential election was to put the son of an Israeli terrorist, Rahm Emmanuel, in the same role, Biden’s first move was to entrench Jewish control of his government. Klain is a Georgetown and Harvard-educated lawyer, lobbyist and Washington insider who once oversaw Bill Clinton’s judicial nominations, leading the team that won confirmation of his fellow Jew Ruth Bader Ginsberg to the Supreme Court. Klain also served as Chief of Staff to Janet Reno, the infamous Attorney General who presided over the Waco massacre in 1993 and made the decision to release poison gas into the Branch Davidian compound, leading to the incineration of 76 men, women and children. In between government appointments, Klain has enriched himself as a lobbyist for various investment firms and the government sponsored mortgage company Fannie Mae, whose purpose is to protect wealthy bankers from losing money on the housing market. 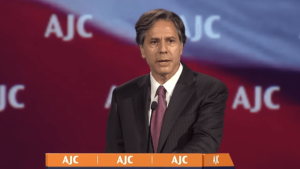 For the top diplomatic position of Secretary of State, Biden has selected another Harvard-educated lawyer, New York City Jew Antony Blinken. A career creature of sinister globalist think tanks, including the Council on Foreign Relations (CFR) and the warmongering Center for Strategic and International Studies (CSIS). Blinken supported the disastrous 2003 invasion of Iraq, the 2011 intervention in Libya and Saudi Arabia’s brutal repression of the Houthi movement in Yemen. He vocally supported Israel during the 2014 attack on Gaza, characterizing the killing of thousands of Palestinian civilians by Israeli missiles as “self-defense.” Blinken has represented Israeli artificial intelligence firms in the private sector, and has expressed his support for and intent to continue President Trump’s Israel-first policies. He has already said that the Biden administration “would not tie military assistance to Israel to things like annexation or other decisions by the Israeli government with which we might disagree.” In other words, Israel will receive US aid no matter how badly they behave. 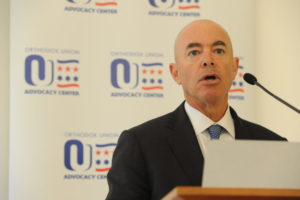 Biden’s pick for Secretary of Homeland Security, who will have broad powers to spy on American citizens and affect immigration policy, is another Jewish lawyer, Alejandro Mayorkas. Mayorkas, who grew up in Beverly Hills, is being celebrated by the mainstream media as the first immigrant and the first “Latino” to hold the position. Leaving aside the sheer absurdity of celebrating that the highest domestic security official was not even born in this country, and the entirely valid question of why ordinary Americans should be happy about this, what the media are not celebrating publicly is Mayorkas’s Sephardic Jewish ancestry.

Mayorkas has benefited tremendously from nepotistic tribal connections. He was first recommended by Jewish Senator Diane Feinstein under the Clinton administration to the position of US Attorney for the Central District of California, where he created the Civil Rights Section to “prosecute hate crimes and other acts of intolerance and discrimination.” During the Bush years, he represented Fortune 100 companies in a prestigious international law firm, before returning to various posts in the Obama administration, where he was responsible for implementing the Deferred Action for Childhood Arrivals (DACA) program while director of United States Citizenship and Immigration Services (CIS). During his tenure at CIS the EB-5 Visa program, a fundamentally corrupt system in which US visas are sold to foreigners for $500,000 each, was greatly expanded. In 2013 he was implicated in a corruption scandal involving favoritism in awarding EB-5 visas along with Democratic Senator Harry Reid, Hillary Clinton’s brother Anthony Rodham and Terry McAuliffe, the former Clinton fundraiser and Governor of Virginia who authorized the state crackdown on peaceful dissidents in Charlottesville. In 2017 Mayorkas was selected to chair the Cyber Leadership Committee of the US Chamber of Commerce, a pro-business and pro-immigration lobbying group.

Mayorkas is deeply committed to both his Jewish identity and his loyalty to the Zionist state. According to the Jerusalem Post, Mayorkas “first visited Israel in 1977 and continued to visit multiple times… honored by the Board of Directors of the Jewish Federations ‘for work combating antisemitism as part of [his] Homeland Security responsibilities…’ In 2016, he spearheaded a deal to automate the sharing of cyber-data between Israel and the US.” Additionally, “during his three-year tenure as deputy DHS secretary, Mayorkas was vocal in his opposition against antisemitism, allocating a large majority of non-profit security grants to combating antisemitic extremism online, as well as implementing counterterrorism measures to protect houses of worship and Jewish institutions.” Mayorkas also sits on the board of the Hebrew Immigrant Aid Society (HIAS), a Jewish NGO that resettles migrants in the West and coordinates between Israeli and diaspora Jews in order to facilitate the removal of refugees from Israel to the US and other Western countries. 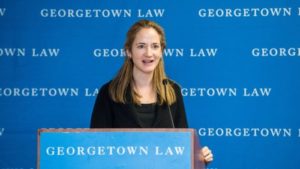 Avril Haines, who previously held the positions of deputy director of the CIA and deputy National Security Adviser, is being lauded as the first female Director of National Intelligence. Born in Manhattan to a Jewish mother, Haines is yet another lawyer who went to Georgetown. The discussion of Haines breaking some kind of non-existent glass ceiling as a woman is a distraction from her far more relevant identity as a Jew. Haines’s sex will not lead to any change in the status quo policies of US intelligence agencies, but her Jewish identity raises serious questions about which nation she is actually gathering intelligence on behalf of. Under Obama, Haines “played a significant role working closely with John Brennan in determining administration policy on ‘targeted killings’ by drones.” Haines has also consulted for Palantir Technologies, a high tech firm founded by homosexual GOP donor Peter Thiel that specializes in cyber espionage and has shady connections to Israeli intelligence. This embarrassing fact briefly came to light after her nomination was announced, but was quickly hushed up with the assistance of the US media. Haines is yet another career DC swamp creature that financially benefits from the revolving door between government posts and “consulting” gigs for various business interests related to American national security policy, leveraging her Jewish tribal connections along the way. 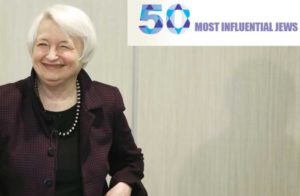 Janet Yellen, Biden’s pick for Treasury Secretary, is being hailed as the “first woman” to hold that office. But as a Jew from New York, she is decidedly not the first to hold that position. Her predecessor, Trump-appointed Steve Mnuchin, is also a New York Jew, who succeeded another New York Jew, Obama-appointed Jack Lew. Yellen previously served as the Chairperson of the Federal Reserve, taking over from Hebrew-speaking Bush-appointee Ben Bernanke, who took over for the Jew Alan Greenspan, famous for being a disciple of the Jewish libertarian ideologue Ayn Rand. Far from being a first, Yellen is yet another in a long line of Jews that have had a stranglehold on US monetary and fiscal policy since the formation of the Federal Reserve in 1913.

In order to bolster his claims of having a “diverse” cabinet, Biden appointed a “token negro,” Linda Thomas-Greenfield, to the relatively powerless and unimportant position of UN Ambassador.

Along with the overrepresentation of Zionist Jews in the Biden cabinet, the total lack of anyone with progressive policies or credentials is striking. All of Biden’s selections so far have deep ties to defense contractors, big business, intelligence agencies and Wall Street, despite polls showing that a large majority of Americans want Biden to specifically avoid these kinds of appointments, and despite Biden’s own promises that he would work with the progressive wing of the Democratic Party. But now that he has safely won, Biden has snubbed progressive favorites like Elizabeth Warren and Bernie Sanders in favor of a plutocrat all star-squad, and the media is covering for him with phony claims of diversity. Zionist wars, Wall Street dominance, big business lobbying, war profiteering, government and big tech spying, mass immigration and refugee resettlement have been consistently unpopular with Americans for decades, yet the narrow racial and economic interests of Jews and corporate elites like those in the Biden cabinet prevail politically time and again.

This situation is why the NJP calls for a 2% ceiling on Jewish representation in the nerve centers of American power. If White teachers, policemen and firemen must be limited by race, then why should Americans of any color tolerate such obscene overrepresentation by the Jewish race in the most powerful positions in the government? This question is particularly important given that every policy goal pursued by Jewish elites is in direct contradiction with the wishes of the American people. The Jewish community, the Biden administration and the US media owe the people of this country an explanation as to why Jews are more deserving than Whites, Blacks, Latinos or any other group of having such a disproportionate grasp on power.