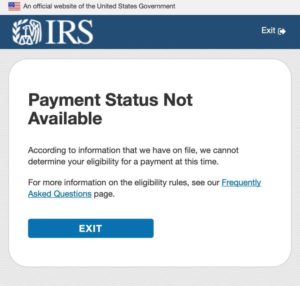 As the stage-managed national debate over COVID-19 has descended into puerile name-calling and finger-wagging between liberal and conservative twitter celebrities over mask-wearing, working Americans are quietly being ruined economically and there is no relief in sight.

In March, in the throes of initial panic over the new and unknown virus, the Federal government passed the Coronavirus Aid, Relief, and Economic Security (CARES) Act. The Act provided roughly $2.2 trillion in “economic stimulus” to the US economy. The motivation for such a large sum of money being injected into the economy was the sharp decline in US stock prices due to the shock of the virus. The Act was passed unanimously in the Senate and by voice vote in the House, revealing unanimity among the elites that control both parties that the economy had to be bailed out.

Despite many provisions of the Act that were geared towards bailing out giant corporations and the creation of ample opportunities for fraud and grift via the Paycheck Protection Program (PPP), the CARES Act nonetheless contained real and significant aid for working class Americans with $600 per week in additional federal unemployment benefits for Americans that were laid off or could not work due to COVID-19. Millions of people relied on these payments to get them through the tough times.

Remarkably, US incomes actually rose due to these payments, a fact that is an indictment of the US economic system rather than of the benefits themselves. Roughly 2/3 of American workers received more from unemployment than they had been receiving in wages and salaries. This situation was declared intolerable by politicians, economists and commentators from both the Democrat and Republican parties. Millionaire TV pundits bewailed the fact that many people would prefer to stay home and take the payments than they would to work. The obvious solution of simply continuing the payments for people that returned to work was never suggested by any party. In September, the extra federal benefits ended, leaving millions of workers without a way to make ends meet.

The Paycheck Protection Program, which failed to protect jobs and small businesses, was nonetheless widely abused by the wealthy and politically connected. A report out of Oregon claims that 1/3 of all funds disbursed in the state were given to only 1.6% of recipients. According to other reporting, companies associated with Jared Kushner, the President’s son-in-law, received millions in PPP payments, despite not offering any proof that they had retained a significant number of jobs.

Anti-free speech, left-wing activist and Jewish supremacist groups, which are funded by wealthy and politically connected donors and were not under any economic risk, received large windfalls from PPP. The Anti-Defamation League, a Jewish organization that brags about its role in promoting online censorship, received up to $10 million from the program. A database search of PPP recipients shows that organizations whose names contain at least one of the words “Jewish,” “Israel,” “Hebrew,” “Zionist,” or “Holocaust” received over 750 PPP grants, many of them over $1 million. So called “Human Rights Organizations”, none of which are dedicated in any way to the rights and well-being of European-descended Americans, received 200 such grants. Not only did White advocacy groups not receive any PPP funds, PPP actively discriminated against White small business owners, setting aside $30 billion specifically for businesses owned by nonwhites.

The economic problems caused by COVID-19 have not affected Wall Street or the banking and corporate elite, all of whom are in a better position than they were previously. The stock market came roaring back from the temporary decline in August and the Dow Jones Industrial Average surpassed 30,000 in November. Billionaires in the US, about half of whom are Jewish, have seen their wealth grow by over $800 billion during the pandemic.

As of this writing no new economic stimulus bill has been passed and help from the government for ordinary people is dwindling. The Federal moratorium on evictions and the mortgage forbearance program expire on December 31st, putting millions of Americans at risk of losing their homes just as the coldest months of winter set in. The “compromise” economic relief bill that is currently on the table does not contain any direct stimulus payments to ordinary Americans, but it does contain liability and other protections for large corporations whose workers have been exposed to the virus in the workplace.

For months a phony show of tough negotiations between Republican Mitch McConnell and Democrat Nancy Pelosi has been used by the media to cover for the total lack of action by the government. The ultra-rich have been raking in cash, so there has been no pressure on the political class to act. To further distract from government inaction, a phony left vs. right debate over the wearing of masks has been promoted on social media. Working people who see their small businesses and jobs being destroyed by lockdown programs are being ridiculed for skepticism of the virus by left-wing activists, journalists and professional class liberals who telecommute, and are thus at no risk of losing their incomes. But for working class people this is literally a life and death situation. With the government offering no relief, is it any surprise that small shop owners, service workers and laborers refuse to believe in the thing which is destroying their livelihood? What is necessary is strong action by the government to cover all workers and small business owners for as long as is necessary with as much money as is necessary, not for privileged snobs to thumb their noses and finger wag those below them on the economic and social ladder.

Neither a Republican nor a Democratic regime in Washington will provide such relief. The phony populism of the Trump Presidency has completely given way to a business-as-usual Republican government. As for the Democrats, despite bloodcurdling cries of “socialism” from the neoconservative right, the incoming Biden administration is full of plutocrats and Jewish elites and is totally committed to a neoliberal agenda. If they are “socialists” it is only socialism for the rich, who treat the Federal debt like a personal savings account. The rest of us are subjected to market discipline as we receive a seemingly unrelenting wave of hypocritical lectures on “work ethic” from television personalities and think-tank employees. Expect whatever package finally gets cobbled together by either the Trump or Biden administration to be temporary and offer only the smallest of scraps to ordinary workers.

The National Justice Party stands firmly against any further giveaways to big banks and corporations or to politically connected left-wing and Jewish activist groups and in favor of a massive relief program aimed at workers and small businesses. If the state claims that it is necessary to put the livelihoods of millions of people at risk with lockdowns and curfews, then they have the moral responsibility to cover those affected for every single dollar and then some. The current plutocratic system in the US does not recognize any such responsibility, and is therefore fundamentally illegitimate. If the power of government spending can be used to bail out the rich, it can be used to help the rest of the country as well.