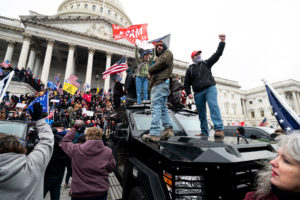 The National Justice Party stands in total solidarity with the spirit of the National Uprising of January 6th, 2021 in Washington, DC. What started as a protest against election rigging flowered into a spontaneous demonstration of popular will against the corrupt and evil globalist ruling class, the likes of which has not been seen for generations.

For once, the voices of those people most despised by the ruling class of the United States were heard in the halls of Congress. The politicians who have lied, betrayed and sold out the American people for decades were forced to cower in fear and scatter like rats from the roused spirit of the long-suffering public. All at once, the global Zionist empire which has done so much to topple popular governments around the world through fake, CIA-backed “color revolutions” was forced to contend with a real expression of the people’s will in its own back yard. 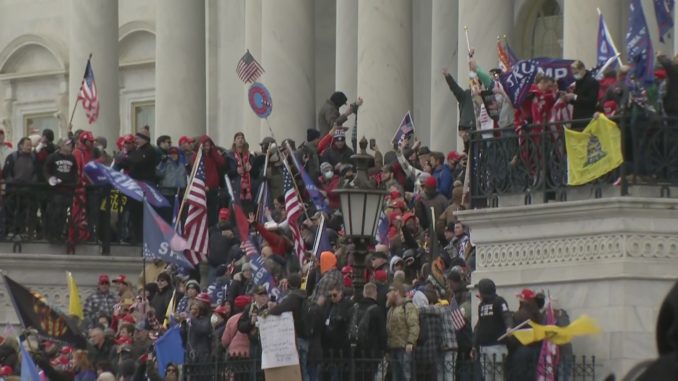 What happened on January 6th was not a “riot,” let alone an “insurrection,” “sedition,” or a “domestic terrorist attack.” All of these vile terms of abuse, and worse, have been endlessly screeched by the same media and politicians who insisted for months that Black Lives Matter (BLM) and antifa rioters were “peaceful protestors.” Unlike BLM/antifa, the demonstrators of January 6th did not smash up small businesses. They did not attack and beat up random law-abiding citizens. They did not start fires and burn down buildings. They did not desecrate and deface the statues and monuments of the past. They did not engage in large-scale looting or vandalism. They did not terrorize innocent people, but focused all their expressions of righteous indignation on the temples of the powerful. The extreme restraint practiced by the January 6th demonstrators is remarkable. Presented with an opportunity to wreak violent vengeance on their tormenters in Congress, the people mostly contented themselves with symbolic acts of defiance, such as the patriot who, with a mischievous grin, propped his feet up on Nancy Pelosi’s desk and left a note explaining his opinion of her.

What we saw over the summer from BLM/antifa was hordes of violent thugs frothing at the mouth with hatred of America, White people and Western culture, bent on a Bolshevik lust to burn, loot and inflict as much terror and destruction as possible. What we all witnessed on January 6th was a demonstration by people who love America, whose work supports America, whose taxes pay for America and whose sons and daughters fight in the US Armed Forces. The unrelenting insults directed at them by the jackals of the US media and the continual betrayals by the political whores in Washington DC moved them to strike back against those who have abused their nation for so long. It was only because of their basic decency that the demonstration was so overwhelmingly peaceful, so cheerful and so absent of malice or any spirit of wanton destruction.

Another striking difference between the demonstration of January 6th and the BLM/antifa riots was the reaction of law enforcement and public officials. BLM/antifa leaders are attempting to turn reality on its head by complaining on social media about the unequal treatment of BLM/antifa rioters and the January 6th demonstrators. They are absolutely right, but not in the way that they intend. There is no equivalence between the meek and flabby response of police to the summer riots and the murderous crackdown at the Capitol. January 6th saw no police kneeling down in submission as we saw over the summer. When security forces briefly retreated in the face of an overwhelming, nonviolent surge by the people, this was characterized by the Jewish media as a sign of “White privilege.” This is a Big Lie, and an attempt at gaslighting White America into betraying their own instincts. Capitol security forces shot dead an unarmed woman, US Air Force veteran Ashli Babbit. Three others died in the crackdown and countless innocents were injured by brutal police beatings and tear gas. Meanwhile politicians and state officials, who made no hesitation this summer in offering obsequious and hypocritical “prayers” on behalf of violent criminals and sanctimonious denunciations of honest policemen simply doing their jobs, had nothing but praise for Capitol police, even as they murdered an innocent woman.

The FBI, who have openly sided with BLM/antifa rioters and refused to investigate or enforce the law against them, are now calling for American citizens to turn snitch and inform on demonstrators in order to assist federal agents in carrying out their revenge against the people. In reality the FBI does not expect cooperation from ordinary Americans, but is calling on their allies in the selfsame anarchist groups that incited rioting and even committed several murders over the summer, to provide them with intelligence on the January 6th patriots. Democratic and Republican politicians, the corporate media, big-business plutocrats, left-wing celebrities and violent anarchist groups are all screeching with one voice, supporting the FBI and howling for the blood of White Americans.

The media endlessly tell us the issue of election rigging is based on lies and conspiracy theories, but US elections have been fundamentally rigged for decades. The 2020 election was no different. It was rigged against the American people from the beginning—and not simply by voter fraud in large cities controlled by corrupt Afro-Democratic party machines, nor by the legal trickery of Democratic Party lawyers, who disenfranchised the Green Party by striking them off the Pennsylvania and Wisconsin ballots. The election was rigged by the censoring of popular voices and opinions on YouTube, Facebook, Twitter and Google, by the overwhelming anti-White bias of the media, including FOX News, by the control of mass media by Jewish oligarchs. It was rigged by the corrupt and illegitimate system of campaign finance where a handful of billionaire donors determine the fate of millions, while ordinary people have no voice. The election was rigged by decades of forced housing and busing which deliberately broke up White ethnic neighborhoods in American cities, forcing our people out into the suburbs where it is much harder to organize. It was rigged through decades of flooding America with tens of millions of legal and illegal immigrants by Jewish lobbyists and big business interests, who have openly bragged for years about their intention of outnumbering White, native-born Americans in national elections. The tens of millions of Americans angry with election rigging know this in their hearts, even if none of their so-called leaders have the courage to say so.

Trump’s eager collaboration with establishment conservatives has predictably resulted in all his erstwhile allies–Mitch McConnell, Mitt Romney, Lindsey Graham and even the phony nationalist Tom Cotton along with countless others–denouncing and disavowing him. But Trump himself, along with the Kushner family, deserted his supporters by first retreating to the White House despite promises he would stand with them, by telling them to “go home” after giving them every impression he supported their march on the Capitol, and then by telling them to “respect the police” after hundreds of his supporters had suffered beatings and gassings at the hands of those same police. We call on the President to take responsibility for his words and actions by providing financial and moral support to the people who suffered in the crackdown. All legal and medical expenses for demonstrators that have been arrested and injured ought to be paid out of Trump’s own pockets. Such support will not materialize however, and Trump’s lack of leadership and betrayals will have tragic results in the coming days as the ruling class reap savage vengeance on the DC protesters with absolutely no resistance from Trump or any conservative institutions or personalities.

If January 6th proved one thing, it’s that the Trump movement was always bigger than Trump. Trump was a leader unworthy of his supporters. But even left leaderless, the January 6th demonstrators showed a courage and heroic determination to stand up to their oppressors in a spirit comparable to great popular uprisings of history, such as Shay’s Rebellion, the storming of the Bastille, the 1956 Hungarian Revolution or the French Yellow Vest movement. When the establishment calls the events of January 6th an attack on “democracy,” what they mean is it was an attack on the “democracy makers,” those Jews and capitalists who manage the economy and falsify public opinion to keep their own dictatorship of money and lies in power. Decade after decade, they have suppressed the will of the people while ramming through unpopular policy after unpopular policy. Decade after decade, they cheat and steal from the American people while wrapping themselves in the self-righteous cloak of “democracy.” They have no idea what democracy even means.

On January 6th, for a brief moment, the globalist ruling class came face to face with the anger of a disenfranchised America that has been boiling beneath the surface for decades, and it shook them to the core. January 6th showed them the roots of White America are still strong. The American people are waking up, and they are not going back to sleep under a Biden-Harris administration. In the same spirit that we at the National Justice Party scorn any allegiance to Trump or the cowardly, disgusting Republican Party, we unconditionally salute the brave demonstrators of January 6th, we grieve for the families of the patriots murdered by federal police, and we vow to honor their courage and sacrifice by continuing the political struggle for the life and freedom of our country and our people.