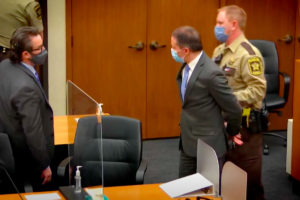 We’ve learned a lot from the Derek Chauvin trial.

During proceedings, we heard from Dr. Martin Tobin that being overdosed three times over on fentanyl will not affect your breathing.

We learned from Minnesota Police Department use of force expert Lt. Johnny Mercil that officers are not trained in using the now infamous neck restraint, in direct contradiction to the MPD manual produced back in July saying otherwise.

Judge Peter Cahill, the head kangaroo, kindly informed us that he was presiding over a mistrial.

Chauvin was still convicted. According to the public record, he deliberately murdered George Floyd and accidentally killed him at the same time.

Almost no experts agreed to testify on behalf of Chauvin. It’s not that they thought he was guilty, it’s that they were afraid of personal consequences. These fears turned out to be merited after criminals vandalized and placed a pig’s head at what they believed was the home of defense witness Barry Brodd.

Nelson, facing a uniformly hostile media, politicians, terrorists ready to strike, and a million other disadvantages, still managed to establish reasonable doubt ten times over. He was sober, charitable with witnesses, and refused to engage in political theater or polarizing tactics.

In the simulation of reality conservatives sell, Chauvin should’ve won. Classical liberals denounce Carl Schmitt’s theories as pragmatic and collectivist (aka, “Nazi”), instead arguing that institutions like the judicial system are somehow socially sequestered bastions of reason where individual liberties paired with facts and logic always triumph in the end.

The absurd assertion that courts are somehow detached from political will may make you feel like the smartest man in the room, but for Derek Chauvin, it will cost him his life.

According to Judge Cahill, Chauvin should appeal. But the chief justice at the Minnesota court of appeals is no blindfolded Dike, but instead Susan Segal, an eccentric Jewish woman trained to hate White men at Berkeley.

We can examine all of the other corrupting factors in the case, from the rigged jury to the ubiquitous fear of provoking another four months of anti-White pogroms like those we saw last summer. But at the end of the day, the problem is the collective White reluctance to escalate, a phobia artificially created by a critical race theory system that imbibes moral self-doubt from the left and destroys group solidarity from the right.

This problem has intensified in recent years. During George Zimmerman’s similarly politicized case in 2013, his defense team was willing to polarize the public, attack media-martyr Trayvon Martin as a psychotic drug addict, and impeach the prosecution’s witnesses. They made the judge work hard, forcing her to constantly strike down novel and out-of-the-box legal arguments that they were using to test the limits and just be a huge pain in the ass. When they destroyed and humiliated the perjurer Rachel Jeantel, the defense was panned as racist by all the “experts,” and they didn’t care.

A lot of things have changed institutionally in America since then, but the principles remain the same in all things in life. If you keep deferring to your nagging wife, you will get divorce papers. If you keep buying the toy every time junior throws a temper tantrum, he will grow up to be a social problem who loathes you. Using your indoor voice when the other party is raising theirs when you are clearly in the right is a recipe for your demise.

It is the mind virus of conservatism, the mindset of the undignified wimp, that has led to us being frog marched to our doom. The most prolific opinion columnist in the paleo-conservative world, Rod Dreher, has declared that he has no opinion on the Chauvin verdict. His advice to those worried about our country becoming a more depraved version of Robert Mugabe’s Zimbabwe? Flee to Hungary.

Derek Chauvin’s case is a wake up call to America: they don’t care about the facts. They see your willingness to be quiet in the face of outrageous lies as license to oppress you harder. Conservatives have taught White men to fear putting on the boots because it might hurt your feet. We are in a post-liberal era, get over it.

Now that police see the consequences of apprehending a black criminal everyone, including and especially blacks, will be suffering the deadly consequences. Thousands of more people will die in 2021 and the overall feeling of permanent disorder in America will intensify. Why? Because the Judeo-left is fighting an open race war against Whites and the Judeo-right is quoting Martin Luther King.