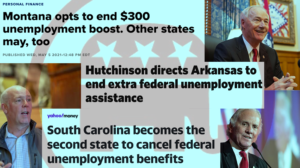 Judging from their recent actions, it’s a tranny in a private jet trying to strongarm you into taking a low wage, entry level job.

The impotent GOP has demonstrated that it cannot and will not govern on the cultural issues they campaign on, but when it comes to stealing unemployment benefits from their struggling voters and constituents, the US Chamber of Commerce is happy to throw this pathetic circus elephant a peanut.

The latest agenda item from the GOP comes straight from the hotel and restaurant lobby: by compensating workers laid off due to COVID restrictions you are preventing them from going back to work.

But a new report surveying restaurant workers that have decided to leave the industry provides better insight into the root of the “labor shortage.”

When we sift through the tacked on identity politics (the study was conducted by Berkeley), we can pan out what the real problem is: a steep decline in tips due to reduced patronage, an overall lack of job benefits, and the stresses of both being tasked with enforcing stupid liberal mask mandates and the risk of getting into confrontations with agitated conservative customers for doing so.

Tucker Carlson and other self-styled “populists” have packaged their anti-popular position in the language of David vs Goliath, claiming that federal pandemic unemployment benefits end up benefiting big business because they are better situated to pay higher wages.

If that’s their concern they should have supported Senator Josh Hawley’s legislation which proposed to subsidize overdue wage increases for those employed by small businesses. But Hawley’s bill is collecting dust.

In truth neither workers or small business owners have any say in American politics. The real motive behind the GOP’s position is that gig workers — who aren’t eligible for state unemployment benefits but are now receiving federal money — are refusing to be serfs for the exploitive and parasitical Jewish business model of companies like Uber. This is causing their stock to fall and it is apparently the job of the Republican party to make the big line go back up.

Like a plant floating in the ocean, conservative moaning about “Woke Capital” and “Big Tech” has no philosophy, substance or coherent program behind it. Conservatives are not the solution but the enabler of our national, economic, moral and racial crisis due to their refusal to use the government to defend the values and interests of the people that elect them. The insane concept of allowing wealthy private interest groups like George Soros’ Open Society Foundation to dictate every aspect of our lives didn’t originate on the left, it grew out of the warped mind of William F. Buckley and the policies of the “Reagan revolution.”

Because the state never tells big business no, our middle class is dying and our country is falling apart. Time and time again, employers have taken positions that run diametrically opposed to both national and popular interests.

For example, in 2019 (a year of record immigration), they whined that the mere prospect of having to obey laws preventing them from hiring illegal aliens (which are seldom enforced to begin with) was cutting into their profits.

In 2020, they sued the US government for implementing tariffs protecting national industries and interests, flaunting their complete lack of patriotism.

Now in 2021, they have decided that they are somehow entitled to make first world profits while paying third world wages. Says who?

Wages in the United States have famously stagnated since the 1970s due to both Democrats and Republicans constantly acquiescing to the greedy demands of big business. Our society has been altered, in some cases permanently and for the worst, to secure the perpetual advantage of employers over labor through privatization, forcing women into the work force, globalization and mass immigration.

Ultimately, the US government has no choice but to increase its activism in the economy if it wishes to be even remotely competitive with China, as academic Aris Roussinos has written. But does it have the will?

The harebrained GOP, desperate to win back prestige and high status bourgeois voters post-Trump, has decided that taking Federal unemployment benefits away in Montana, South Carolina, Arkansas and no doubt more states to come, a move that overwhelmingly negatively affects White people, is the hill they want to die on. By trying to sit in two chairs at once they will fall flat on their asses.

It’s time for the White working class to break with the Republican party, a business that hates its own customers.

Only a revolutionary challenge to the neoliberal status quo led by the National Justice Party and embodied by its 25 point program can solve the crisis which we have found ourselves in.