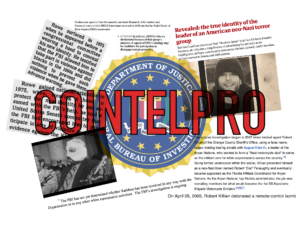 Much has been said and written about the FBI’s targeting of Blacks, left-wing groups and the anti-war movement during the 1960s, but little is said of their pivotal role in portraying White activism as domestic terrorism during the same time period, a practice which continues to this day.

On September 15th, 1963, the national press reported that members of the Ku Klux Klan planted dynamite at the 16th Street Baptist Church in Birmingham, Alabama and killed four Black girls in the process.

The incident was a propaganda boon for the unpopular “Civil Rights” movement, as well as demoralizing to White Southerners, who sought to resist federal integration mandates peacefully and politically. Nobody outside of New York and Washington DC was interested in murdering innocent children at church.

At the trial of Robert Chambliss, the only Klansmen ever prosecuted for the attack, the defendant testified that it was a husky man named Gary Thomas Rowe who had planted the dynamite at the house of worship. Rowe failed multiple polygraph tests regarding his role in the bombing, but Chambliss was unable to call him as a witness and was convicted for the crime in a kangaroo court.

In 1965, a White integration activist, Viola Liuzzo, was shot to death in Alabama, again supposedly by the Klan.

At the time, Liuzzo’s killing was turned into a sensational story that the New York Times fixated on as a way to paint common sense White political dissent against undemocratic federal judicial edicts as a defacto act of terrorism. Liuzzo was portrayed as a national martyr, and more importantly for the rats in New York and DC, a catalyst for heightened aggression in the Department of Justice’s (DOJ) witch hunts for “racists” in the South.

Once again, the Klansmen accused of the crime insisted that Rowe was the gunmen. The state of Alabama attempted to charge Rowe for Liuzzo’s murder, but attempts to extradite him failed.

At the 1975 Church Committee, a Senate commission brought to light some of the FBI and CIA’s unspeakable crimes against humanity when the US elite suffered repeated crises of credibility during the tumultuous 60s.

During these proceedings, Gary Thomas Rowe—the man implicated in virtually every high profile act of Klan “terrorism”—testified that his FBI handler had instructed him to infiltrate white civil rights groups and organize political violence in their name as part of the Bureau’s COINTELPRO operation to crush domestic dissent.

While the Church Committee brought to light a decade and a half of outrageous government conduct, the safeguards intended to prevent them from happening again were informal, preserving the ability of the FBI to use these tactics against groups out of favor with elites while protecting left-wing extremist groups that enjoy the support of the rich and powerful.

In a Tucker Carlson Tonight segment from June 15 it was revealed that FBI operatives played a central role in the January 6th breach of the US Capitol.

The full extent of the FBI’s role in provoking lawbreaking on January 6th is seeping out through court documents, but much of it still remains shrouded in mystery.

On January 10th, the FBI signed an agreement with the US Capitol Police that would keep all “video, audio, photographic and documentary information” from 1/6 in the hands of USCP, which means that they cannot be obtained under the Freedom of Information Act (FOIA).

Unless Congress acts, the public will never be able to see fully contextualized footage of what exactly transpired at the Capitol and whether FBI undercover employees and informants were the ringleaders in the violence or got innocent people killed.

Julie Kelly, one of the only mainstream journalists in America who has been following the abominable treatment of January 6th protesters jailed without bond, has noted that defendants who have not been convicted of any crime are subjected to the torture of full blown solitary confinement as well as regular beatings by the predominately Black staff at the violent DC jail they are being held in.

The goal of The DOJ is to compel the defendants to become cooperative witnesses in order to bolster farfetched and politically motivated narratives about 65-year-old “militia coup plotters” from Arkansas concocted by federal prosecutors. In other cases they want defendants to sign false confessions before going to trial in hopes of being transferred out as soon as possible.

While the full picture is not yet clear, we know that virtually every “White supremacist terror” arrest in America has been informant driven, with FBI agents and provocateurs being central instigators in bogus plots, rather than passive observers.

Through multiple interviews with former Atomwaffen members and speaking off the record with figures in the court system, I learned that the paid informant preyed on the more psychologically fragile members and manipulated them into committing small-time acts that the FBI would later round them up for in the interest of parading them as national villains.

It doesn’t end there. In one particularly egregious case, the leader of a supposed “White supremacist terrorist” boogeyman group subjected to multiple arrests had his cover blown, revealing that he was a long-time FBI employee and active private military intelligence contractor.

In the Gretchen Whitmer “kidnapping plot,” federal prosecutors are struggling to save their case as details emerge that FBI agents and informants planned the whole thing and tricked a mentally ill homeless man into taking credit.

In the most recent hoax, the FBI pursued a racially and politically motivated charge against a man for placing a gas canister near a Jewish Center despite acknowledging that they had no evidence that the man had any ties to “White supremacist terrorist” groups, or any political motivations whatsoever. After an initial mistrial, U.S. Attorney Nathaniel Mendell was able to secure a conviction in a second trial.

A mere cursory search will find that every single foiled “White supremacist terror” plot is a product of federal agents engaging in one civil rights atrocity after another to farm arrests for Big Jew organizations like the Anti-Defamation League. America’s billionaires, represented by groups like the ADL, are desperate for an excuse to take away the First, Second and Fourth Amendment rights of White Americans engaging in constitutionally protected political activity that we use as the founders intended: to question their illegitimate stranglehold over our republic.

The U.S. government does not have a leg to stand on when lecturing Russia or China on their treatment of domestic dissidents when it does the same or worse at home. Every oppressive regime labels its critics as “terrorists.” The concept is purely political, and politically prejudiced laws are not in keeping with the founding principles of America.

The government should either make laws specifically criminalizing disagreement with Jewish groups in plain language, or else uphold our rights as citizens. Enough with the lies, charades and theater. Dissent is not terrorism, and every time media pundits or government officials publicly claim it is, they discredit themselves even further.

The Zionist triumvirate of Alejandro Mayorkas, Merrick Garland and Anthony Blinken, who together make up the the true power behind Joe Biden’s decrepit throne, cannot be allowed to use 1/6 as their Gulf of Tonkin to wage the domestic dirty war against dissent the White House declared on June 15.

The recklessness and rank corruption of the FBI is not only limited to White nationalists and Trump supporters. Earlier in the week, an FBI agent testified under oath that he falsely accused a random Chinese man of being a spy for the Chinese Communist Party because he was incentivized to do it. The massive incentives created by the Department of Justice to “combat domestic terrorism” will be no different, and will take attention off the national crisis everyone is talking about: actual violent crime.

Enough with the FBI’s nonsense. We deserve a full and public audit of this vile and corrupt runaway state within our state.

The National Justice Party joins the growing chorus of the outraged public: demand that Congress found a new Church Committee!