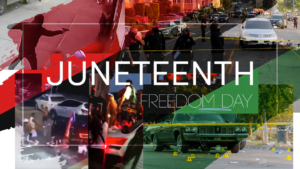 This question was asked by millions of stunned Americans who woke up this weekend to discover a new federal holiday had been declared by President Biden. According to a new Gallup poll, over 60 percent of Americans knew nothing about this ersatz holiday. That didn’t stop the US regime from declaring it the first new federal holiday since another Afrocentric celebration, Martin Luther King Day, was invented in 1981.

Over the weekend of June 19, at least eight people were killed and 40 shot in ten mass shootings, including during “Juneteenth” gatherings around the country. A horrific video surfaced from Chicago in which a Puerto Rican couple was dragged from their car and shot execution style by Black males. The man appears to be trying to shield the woman with his body as she lies motionless on the ground, when he is casually executed with a shot to the head by a Black assailant.

Highlighting the virulent anti-White atmosphere in America, a Black twitter user mistook the flag on the couple’s car for a Confederate Flag and said the victims deserved it! He subsequently deleted his account, but only due to the embarrassment over mixing up the flags, not because he felt any remorse for saying White people deserve to be executed. 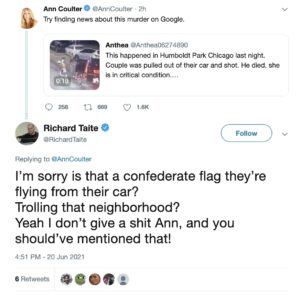 The federal government claims that White “supremacist” racial violence is the number one security threat to America, yet no such violence has occurred so far in 2021. Racially motivated attacks against White people have.

On June 15, police in Columbus, Georgia reported that a Black man who engaged in a two-day long shooting spree—shooting 5 people across 2 states—admitted he was specifically targeting Whites. In March a Black man slashed the throat of a 12 year old White boy at a McDonald’s in Pittsburgh while screaming “White devils!” As of this writing, neither of these men has been charged with a hate crime.

These are just two incidents of intentional Black racial violence against Whites that we know of. There are doubtless many more in which law enforcement, government officials and the media have conspired to conceal the racial motives of Black assailants. Gathering data on Black-on-White crime is difficult. The media refuses to report it, academics will not analyze it and the official sources do all they can to obfuscate the numbers.

The grim tally of Black-on-White murder for the month of June 2021 is not yet complete, but thanks to Kenn Gividen at VDare, we have compilations of the White fatalities at the hands of Black murderers for every month since October 2020. This year so far, 28 White people were murdered by Blacks in January, 34 in February, 33 in March, 29 in April, and 24 in May. Just look at their faces. Women, children, the elderly, family men, veterans, all totally innocent people who were simply in the wrong place at the wrong time.

To put these numbers into perspective, according to the police violence database, only 27 unarmed Blacks were killed by police over the entire year of 2020. More Whites have been murdered by Blacks almost every month this year, yet the media and political class—who tell us that police killings of unarmed Blacks are crimes against humanity and are reaching pandemic levels—refuse to even acknowledge it.

Black-on-White murders are only a fraction of the of incidents of physical assault, rape, debilitating injuries and disfigurements inflicted on innocent White people by Black violence every month. All of these victims have lives, families and loved ones. They are regular people going about their lives, and suddenly they are plunged into unimaginable, agonizing grief and horror at the hands of criminal savages.

The national media systematically ignores their stories. Those whose lives have been shattered and destroyed by Black-on-White racial violence are left without answers and without justice. They have to go back to their schools and workplaces and listen to lectures about “Juneteenth” and the “Tulsa race massacre.” They continue to get harangued about “White Privilege” and “Institutional Racism.” They turn on their televisions and see Blacks constantly portrayed as noble victims, while Whites are cast as rapists, killers and savages.

For those families victimized by Black crime, there is no such thing as “racial justice.” As in the case of Ernest Martin Stevens, a 77 year old White man shot dead by Black carjacker Devin Dunham in 2017, it’s possible that the murderer will simply go free thanks to a lackadaisical prosecution and a racially motivated jury. Stevens’ surviving family and friends not only have to deal with the loss of their loved one, but with the fact that his killer is free and the state has allowed this to happen.

Instead of reporting on this scourge of racial violence by Blacks against Whites, our institutional masters have done everything possible to censor this information, while cramming a relentless barrage of anti-White propaganda narratives down our throats.

Recently, it was the so-called Tulsa “race massacre,” a 100-year-old race riot which began when a Black man attempted to sexually assault a young White woman, and a group of Blacks shot ten White men dead in a confrontation at the Tulsa courthouse. This was presented by the media as a second Holocaust, complete with non-existent mass graves. This week it was “Juneteenth.”

Whites across America are wondering: what new pyrotechnic extravaganza of White guilt and Black victimhood is coming next?

If you’re a White person forced to live in close proximity to Black violence—and our “Woke” elites certainly are not—you are expected to accept this low level of terror without complaint, or else risk your livelihood. White working class people struggling to make ends meet in the corporate grind are forced to put up with arrogant diversity hires and out-of-control HR departments that act as political commissars for the liberal-capitalist state. These system shills and sycophants will not hesitate to punish or fire workers for any perceived deviation from the mandated racial narrative.

Any dispute with a Black person can turn into accusations of racism, loss of employment or even criminal charges and jail time at the hands of anti-White FBI agents and Justice Department apparatchiks. White women who are threatened or assaulted by Blacks are called “Karens” and told to check their privilege. A Black woman who said that White women are “lucky” Blacks are only calling them Karens instead of “calling for revenge,” was recently promoted to the editorial board of the Washington Post.

Despite presenting as moderate, the Biden-Harris administration is aggressively anti-White. Dozens of executive actions have pushed their unpopular racial agenda, from new directives mandating discriminatory “equity” to flooding the country with nonwhite immigration. The statues and graves of White heroes continue to be pulled down and desecrated, while new statues to Black criminals are erected. Huge government resources are being directed to disrupt, harass and entrap Whites in a totally phony “domestic terrorist” scare, while prosecutors dismiss charges against antifa and BLM terrorists all over the country.

Meanwhile, the Republican Party continues to meet this onslaught with its characteristic combination of servile acquiescence, hapless incompetence and self-serving cowardice.

Legislation to make “Juneteenth” a federal holiday was supported by every Republican in the Senate and all but 14 Republicans in the House of Representatives. Some who formerly opposed it only did so because they objected to giving workers a paid day off, before cravenly bowing to political pressure.

The anti-White psychological warfare campaign known as “Critical Race Theory” (CRT), which claims that all White people have an incurable moral disease, is currently being waged against White students all over America. Those conservative gatekeepers that oppose CRT are doing so from an anti-White position, saying they are against it only because it will lead to increased White racial self-awareness.

“Racial Justice” has become a byword for what is in reality a terrible injustice in today’s America: the trampling of the lives and rights of those who do the majority of working, paying taxes and fighting in America’s wars (for Israel) by the minority of the greedy, lazy, stupid and cruel.

This is why the National Justice Party exists: to fight for racial justice for our own people, White people, who have nobody else to represent them!