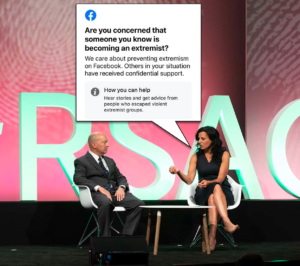 On June 30, the Boston Globe published an article titled “‘There are no lone wolves’ when it comes to white supremacist violence, expert says in wake of Winthrop shooting,” which is perfect example of the dangerous radicalization happening to liberal elites.

This article purports to warn readers that the threat of so-called “lone wolves”—self-radicalized terrorists who act alone, without being part of an organized group—stems directly from the existence of online spaces where citizens can speak freely between themselves.

In the case of the Winthrop shooting, Nathan Allen, a mentally disturbed individual crashed a stolen truck and shot and killed two people before being shot dead by police. The police have not presented any evidence that Allen had any racial motives and he has no history of racial statements or online posts.

District Attorney Rachael Rollins claimed that she is in possession of writings in Allen’s hand declaring the supremacy of the White race, but she has not produced these for public scrutiny. This is unusual for a case involving an alleged “White supremacist.” Usually such cases involve Federal agents or informants inciting mentally unstable people into making violent online statements. The authorities immediately produce evidence of the suspect’s ideology, even though they have not committed any violent actions. Why then, when a suspect has actually killed people, would they refuse to produce any evidence of their ideology for the public?

The Globe interviewed an “expert” named Juliette Kayyem, who boasts the title Senior Belfer Lecturer in International Security at Harvard’s Kennedy School of Government. Kayyem, undaunted by the problems with the Allen case, was quoted at length, declaring with absolute certitude:

“I often say, there are no lone wolves…. Often we find that they seek comfort, shelter, and radicalization through online networks.”

“Who was he communicating with, either online or in person, that may have turned … someone who presumably has not been a menace for years into a racist killer?” Kayyem said. “That doesn’t happen alone in your home. More often than not, that happens because of a network and a community that people find online”…Kayyem said she believes in devoting resources to prosecuting hate crimes, as well as community outreach to encourage people to come forward about signs of radicalization among people they know.”

In other words, thought crimes.

This is an extremist position. But this kind of argument-as-fact is common with liberal elites in academia, NGOs and the national security apparatus. The argument is never couched in terms of an ethical dilemma about the limits of free speech, or a partisan political position to be argued through persuasion and reason. Always this position is declared as objectively self-evident fact in the mainstream media.

Let’s be clear: the idea that huge government agencies need to be directly involved in breaking up gatherings of citizens freely sharing political views and opinions with each other—whether in person or online—is an extremist position.

The idea that people should be encouraged to spy and snitch on their neighbors, family members and friends to government agencies for expressing politically incorrect thoughts, is an extremist position.

Violence by so-called “White supremacists” is practically nonexistent. Anyone that tells you they are concerned with pro-White ideology because of the risk of violence is a liar. They want to suppress ideas and speech. They desperately hope for, and will even work to produce or fabricate acts of violence that can be blamed on pro-White political ideas. It is the ideas they hate, not violence.

Joe Biden this week murdered a child. He authorized airstrikes on the Iraq-Syria border, an illegal act of aggression, which hit residential homes. Even the Washington Post noted this represented an escalation in the use of force by the President of the United States, since no US military personal were claimed to have been killed or injured prior to the attack. Even America’s supposed ally, Iraq, protested the attack as a blatant and unacceptable violation of the country’s sovereignty.

Joe Biden’s murder of the Syrian child, like his support for the Iraq war, was clearly motivated by his support for Zionism. Murder in the name of Zionism is rationalized and justified by the mass media as moderate and necessary, while words spoken on behalf of White people are condemned as extremism and hate.

Why should anyone take these so-called “extremism experts” seriously?

The Boston Globe’s “expert” Juliette Kayyem, is a woman of many talents. She is the CEO of Grip Mobility, a ridesharing security and transparency company, which seeks to provide “an uninterrupted audio/video feed of the vehicles interior“—spying on overworked, underpaid gig workers in their own cars and providing the data to their employers. She also has her own consulting firm, goes on CNN as a National Security Analyst, and has authored a book called “Security Mom.”

Kayyem is also a member of the highly influential Council on Foreign Relations, has served in the Department of Justice under Waco mass murderer Janet Reno, and worked for Israeli technology firm NSO Group, infamous for developing the Pegasus spyware used in targeted attacks against human rights activists and journalists in various countries.

Kayyem is married to Jewish United States Circuit Court Judge David Barron. The couple’s children are all being raised Jewish. Barron, another Harvard graduate, played a key role in setting the precedent that American citizens can be murdered by their government without trial purely for their speech.

“In 2009, while on leave from his faculty position, Barron rejoined the Office of Legal Counsel as Acting Assistant Attorney General. In 2010, he authored a secret memo which provided the legal foundation for President Obama’s unprecedented decision to order a drone strike on Anwar al-Awlaki, an American citizen who was a radical Islamic militant living in Yemen. Barron’s memo was described by The New York Times Editorial Board as “a slapdash pastiche of legal theories — some based on obscure interpretations of British and Israeli law — that was clearly tailored to the desired result.” A lawyer for the ACLU described the memo as “disturbing” and “ultimately an argument that the president can order targeted killings of Americans without ever having to account to anyone outside the executive branch.”

Last week, the US government seized the websites of Iran’s Press TV and other media outlets who offer an alternative view of news outside the Western mass media bubble. This week, Facebook unveiled a new AI program whereby the social media website asks you if your friend might be an extremist.

What is obviously happening to the Harvard-corporate-national security liberal elites is a process of self-radicalization. Twenty years of global war, plus a close brush with the actual forces of populism and discontent with the lives of their increasingly exploited and forgotten serf caste, have put them in a position where they are each trying to outdo the other in new calls for censorship, criminalizing free speech, using technology to spy on and control people, and the use of force to imprison and murder peaceful political dissidents.

The National Justice Party, as always, condemns the murder of innocent people as in the case the Winthrop shooting—regardless of the motives or private thoughts of the murderer. We note, however, that in the numerous cases of Blacks killing White people because of anti-White racism, there are no calls from elites to shut down BLM speech or radical Black activism either online or elsewhere.

On the contrary, the media and government seem intent on pushing radical Black racial narratives and propaganda on the whole country, radicalizing as many Black people as possible to hate Whites.

Clearly, the standard for determining what kind of radicalization warrants censorship and intervention by national security agencies is not that such radicalization leads to murder.

Blacks who murder White people inspired by radical BLM narratives of hate and revenge go unmentioned in the press and have their motives covered up or ignored by law enforcement.

The President of the United States murders children in Syria, and this is met with yawns by the entire mainstream media.

The war criminal Donald Rumsfeld, who died this week after a career which left hundreds of thousands of innocent people dead, was eulogized by the Boston Globe in part for his congressional vote in favor of the Civil Rights Act.

What we have here is not a ruling elite concerned with innocent people being murdered, but a radicalized liberal ruling class determined to keep itself in power at all costs, threatened by the rise of White populism and nationalism, and resolved to find any pretext to tighten the grip of liberal totalitarianism on the rest of us.