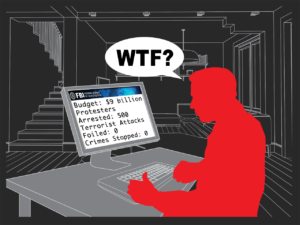 On Sunday, July 11 the official Twitter page of the FBI tweeted out a Stasi-like call for American citizens to spy on their families and friends.

“Family members and peers are often best positioned to witness signs of mobilization to violence. Help prevent homegrown violent extremism… learn how to spot suspicious behaviors and report them to the #FBI.”

Family members and peers are often best positioned to witness signs of mobilization to violence. Help prevent homegrown violent extremism. Visit https://t.co/bql36iSbig to learn how to spot suspicious behaviors and report them to the #FBI. #NatSec pic.twitter.com/ZwJp5h5bWD

The post was met with widespread outrage, condemnation and ridicule. Thousands of Twitter users piled on, pointing out the FBI’s double standard when it comes to BLM/antifa and mocking the FBI for its recent presentation of a LEGO model of the US Capitol as evidence of a planned terrorist attack.

The FBI tweet linked to a chilling 32-page document, published in 2019, titled “Homegrown Violent Extremism Mobilization Indicators,” which leaves no doubt as to the functioning of the FBI as a political secret police.

The document initially calls on citizens to report supposed signs of an impending terrorist attack that you might see in a spy movie or TV police procedural drama, such as someone recording a “martyrdom video/statement” or “suspicious building and/or testing of explosives.”

Interspersed with these self-evident warnings about Hollywood-style terrorist attacks are shockingly Orwellian appeals to inform on people for non-violent activity such as:

6) “Dehumanizing people who are not in the identity group”

7) “Condemning behavior of family and peers based on… extremist doctrine (e.g., denouncing lifestyle choices such as clothing, music”

8) “Changing vocabulary, style of speech, or behavior to reflect hardened point of view or new sense of purpose”

9) “Attempting to radicalize others, especially family members and friends.”

We often hear from establishment liberals about the danger of “demonizing” people, making people into the “other” or “dehumanizing” them as a prerequisite to depriving them of their human rights. The FBI themselves warn of this in their booklet.

But what is the FBI itself doing with this kind of paranoid, fear-mongering language, except dehumanizing the other as a precursor to violating their civil and human rights?

The FBI is recklessly inviting any crazy cat lady, blue-haired social justice warrior or hysterical Rachel Maddow fan to snitch on their own family members who do not agree with establishment liberal orthodoxy, engage in politically right-wing or pro-White speech and advocacy, or take common sense precautions to ensure personal protection and online privacy.

The above list is simply a series of legal and constitutionally protected activities. It is legal to use encryption, it is legal to disagree with your family on politics, it is legal to buy firearms and protective equipment, it is legal to criticize the lifestyle choices of others and it is legal to try to convince others of your views. None of these activities are the business of any law enforcement agency in the US.

The FBI is asking you to report legal and constitutionally protected behavior simply because they as an agency disagree with it.

This has real-world consequences. FBI investigations are opened which result in innocent people being entrapped or killed in botched raids. People can have their lives destroyed by such denunciations, which were commonplace under the Red Terror regimes of the past but should be unheard of in an ostensibly free country.

Even worse is the overall stifling effect this surveillance police state has on dissident political movements who politically and nonviolently challenge the narratives of the ruling Jewish-neoliberal elite.

We must say it over and over again: the true purpose of the FBI’s secret police tactics are not to protect Americans, but to suffocate political dissent.

Even before the political crackdown following the protest of January 6th, the FBI was already facing a historic crisis of credibility following years of scaremongering over the widely debunked Russia-gate conspiracy theory and the phony “White domestic terrorism” hoax.

Americans watched in horror as BLM and antifa mobs burned, looted, vandalized and murdered across American cities for an entire year while the FBI and Justice Department stood by and watched, only for the FBI to unleash a vengeful campaign of political terror on the cheerful patriots and MAGA grandmas who dared to walk inside the US Capitol building—after they were invited in by Capitol police!

According to the gun violence archive, at least 315 people were killed and 733 injured in 875 shootings across the country over the Fourth of July weekend, 2021. The vast majority of these shootings were perpetrated by Black Americans engaged in organized criminal activity. Most of the shootings do not have a known suspect.

There is no evidence of any FBI investigation into any of the July 4 shootings, or into the massive increase in Black violent crime across America since the BLM riots last year. The FBI is more interested in investigating political protesters and peaceful acts of civil disobedience.

The annual budget of the FBI is nine billion dollars, about four billion of which is dedicated to counterterrorism and counterintelligence. Despite this massive expenditure, the FBI has never foiled a single terrorist attack. According to a 2014 Human Rights Watch report, the FBI has never stopped a terrorist attack that FBI agents and informants did not have a hand in organizing. This failure streak has remained unbroken since 2014, with the FBI now using the legally questionable entrapment methods described in the report on White Americans instead of Arabs and muslims.

The stated purpose of the FBI is to “protect the American people and uphold the Constitution of the United States.” Not only is the FBI not doing its job, it is doing just the opposite. It is waging an all-out assault on the constitutional rights of politically right-wing and pro-White Americans.

The FBI is systematically undermining the First Amendment right to free speech. By selectively engaging in harassment, entrapment and prosecution of White people, nationalists and conservatives, while ignoring widespread Black and left-wing violence, the agency is flagrantly disregarding the 14th Amendment right to equal application of the law, as well as the civil right to not be racially targeted or discriminated against.

The FBI is a rogue agency that has become a parasite on the backs of decent Americans.

Instead of protecting Americans and defending their rights, the FBI has become a despised enemy of the people.

Point 8 of the National Justice Party’s platform states: “We demand the FBI, which acts as nothing more than a political secret police force for elite interests, be abolished and replaced with a legitimate federal law enforcement agency.”

Overflowing with corrupt perverts and criminals, doing the bidding of foreign Jews and anti-White traitors, it’s time for the FBI to go!