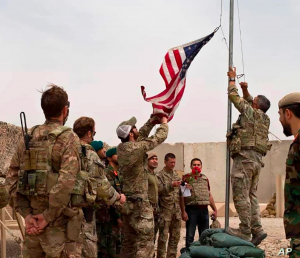 As the Taliban rapidly approaches Kabul, the Pentagon’s ears are ringing with a message they have ignored for 20 years.

The Pashtuns may be stubborn, but another Middle Eastern tribe, embedded deep in the bowels of Washington, are looking to compete.

“The situation in Afghanistan is dire. But it is not too late to deploy forces to stabilize it, and ultimately turn it around.” wrote neoconservative Jew Bill Kristol, for whom the death, destruction and injury of war is merely a chess game where American soldiers are the pawns and the state of Israel is the King.

Kristol—along with Paul Wolfowitz, Michael Gerson, Robert Kagan and scores of other Jews—was part of a Zionist clique that served as the men behind George W. Bush’s throne.

With the help of Jewish political donors to both parties and anger over the 9/11 attacks, their insane plan to invade Afghanistan, install a liberal puppet regime, then use the country as a base of operations against nations in Israel’s way (Syria, Iran and Iraq) was supported in a vote by every member of Congress except one, Barbara Lee.

Now in 2021, we can take a look at the results of their decision.

Two trillion dollars have been spent propping up the illegitimate Afghan regime. If the war was an investment, people would be jumping (or being thrown) out of windows.

Syrians made up the plurality (46%) of the historic migrant wave into Europe in 2014-15, others fleeing the US-created calamities in Afghanistan (21%) and Iraq (9.4%) were a close second and third. This flood of immigration has permanently altered and destabilized Western Europe.

Many of the authors of the Afghanistan disaster continue to work in permanent Washington. Rather than bow their heads in humiliation, people like General Mike Milley—appointed for his political flexibility rather than merit—want to check your White privilege.

The relationship between America’s catastrophic foreign policy and the internal problems plaguing the country are, admittedly, not intuitive, but both emanate from the same source: controlled media, money power, and a bought off political class.

Jennifer Rubin of the Washington Post, who has used her bully pulpit to whip up opposition in DC to any semblance of common sense on Afghanistan, has recently been in the headlines for loudly celebrating the demographic replacement of White people, who are less than 60% of the American population according to the latest census, but make up 85% of US soldiers her ethnic power bloc sent to die or be maimed in Afghanistan.

As for Kristol, he has openly called for the elimination of White working people.

We see in Kabul that a system that lacks popular support and consciously despises the people it rules is, in the long-run, unsustainable.

It is said that a defeat in Afghanistan is a historic forerunner to an empire’s collapse.

As the elite saw with the Taliban, arbitrarily declaring a group or a people “terrorists” and acting accordingly doesn’t work when you lack credibility.

If the hateful and cruel monsters running our massive country from the coasts think they can do the same in America, they will only hasten their downfall.