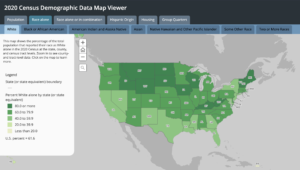 According to the 2020 census figures released by the US government, Whites in America have declined in their percentage representation among the population, but also in absolute numbers. Whites have been shrinking as a percentage of the population of the US since the 1960s, but the latest census marks the first time in history that the absolute number of White people in the country has been reduced.

Jewish political and media figures can barely contain their glee at these numbers.

Perhaps the most overtly ghoulish mainstream commentary came from Washington Post opinion blogger Jennifer Rubin, who exclaimed on twitter that the results were “fabulous news” while warning that Whites must be locked out of any future political power.

In her blog at the Washington Post, Rubin further gloated over the deteriorating condition of rural White people, while reiterating the standard Jewish mantra that America is just an “idea” and not defined by its people.

That reality has, of course, freaked out a significant share of White Christians who do not see “their America” as predominate. It was never “theirs” to begin with, and the assumption that something is amiss if White Christians are not in charge is the essence of white supremacy and Christian nationalism. It is also fundamentally un-American; our country is defined, as President Biden rightly says, by an “idea.”

It is easy, then, to understand why a political party based increasingly on its appeal to White Christians has adopted so many anti-American traits. The sanctity of elections has given way to a sentiment that violence is sometimes necessary (for Whites to retain power). The decline in their numbers has led to worship of totalitarian thugs around the world and disdain for a free society. The desperation for a make-believe world of yesteryear has led tens of millions down the rabbit hole of right-wing media propaganda, where their worst fears and darkest impulses are amplified.

Less remarked upon, but equally important, is that the growth of urban areas (generally more productive, more tolerant and more diverse) leaves rural Whites increasingly at odds with the national ethos. The latter are also poorer, sicker, less educated and have shorter life-spans than their metropolitan counterparts.

Rubin, who lectures White Americans about their backwardness, ignorance and racism for not wanting their race and culture to disappear and for supporting figures like Donald Trump, is herself a rabid Zionist and a supporter of the Likud party in Israel, known for producing figures like former Israeli Prime Ministers Ariel Sharon and Benjamin Netanyahu, whose behavior was far more thuggish than that of the venal and impotent huckster Donald Trump.

Rubin has been a vocal supporter of every Jewish, neoconservative war the United States has launched in the past two decades, using her platform at the Washington Post to launch attacks on anti-war critics on the left and the right while attributing all setbacks to tactical errors or lack of will on behalf of the American population, who never wanted these Jewish wars in the first place.

Rubin is not only a fanatical racial supremacist in her own cause, she is happy for White Americans, who make up 85% of the casualties in Iraq and Afghanistan, to die on the battlefield for the Jewish state, they just can’t actually have any political power in America.

Rubin exhibits all the typical qualities of the right-wing media Jew in America: belligerence, arrogance, chutzpah, bloodthirstiness and utter contempt for the actual wishes of the American people coupled with hypocritical and nauseating expressions of piety for the “sanctity” of American “democracy” and institutions.

Rubin’s “idea” of America is in reality Jewish supremacism masquerading as multicultural democracy. She is wary of White political power because it is the only force that Jews see as capable of challenging them for control of American institutions, which is why all attempts at White organization are decried in the Jewish press as “undemocratic” and now even “terroristic.”

Less virulent but perhaps more sinister was the analysis of the Jew Jordan Weissman at the liberal website Slate, who presented the plight of White America as a fait accompli, and one they have brought upon themselves through their embrace of reactionary populism.

Pundits spent years and untold pixels arguing about whether “economic anxiety” actually motivated many Trump voters, an idea that seems shakier as time goes on and conservatism delves deeper into its anti-vax, anti-CRT politics. What’s more obviously true is that a large share of today’s Republicans live in parts of the country, including deindustrialized rural areas, that are simply remote from the sort of institutions, from government to colleges to major corporations, that tend to generate wealth and growth. The political tragedy of America’s shrinking communities is how that alienation has helped lead them to embrace a reactionary populism dedicated to waging culture wars and leveraging our outdated electoral structure to make sure a minority of the population can continue to govern rather than, say, taking steps that might actually revitalize small towns and farming communities. The sort of robust immigration and public investment favored by progressives might help bring a place back to life, after all; owning the libs for the next decade or so will not. Trump voters, regrettably, have made it clear which they care about more.

This victim blaming narrative is another Jewish media trope that goes hand in hand with the “idea” of America. It inverts cause and effect by claiming that Whites are declining because of attitudes which oppose the racial and cultural policies of elites. This is exactly backwards. Whites see themselves being replaced, react negatively to it and are further punished and targeted by elites for daring to resist.

The fundamental lie of the racial change in America that is told by all media figures, right or left, is that it is simply a force of nature. It is just something that is happening due to the inherent nature of the world. The purpose of this lie to let anti-White policymakers—who have made the conscious decision to change the racial makeup of the country—off the hook and to demoralize Whites who would seek to halt or reverse US racial policy by gaslighting them into thinking White decline is inevitable and nothing can be done.

Make no mistake, the racial and demographic changes in America—the decline of Whites and the reduction of the rural White population to poverty and poor health—are a matter of policy. There is nothing inherent about the world that requires the importation of millions of nonwhite immigrants into America or the divestment of big business and government from the rural middle of the country. These are all choices that have been made by elites in the government, big business and NGOs in direct opposition to the will of the majority of the people.

Like all policies, White decline can be reversed. Immigration can be stopped, borders can be guarded, unwelcome immigrants can be returned to their country of origin and rural and middle America can be revitalized through government and corporate investment. These things are not being done because the political leaders of America in both parties, in thrall to wealthy Jewish donors and Zionist lobbying groups, simply don’t want to do them.

This is the purpose of the National Justice Party, to fight for the rights of White people to control their own racial destiny and to spread the message to America that there is nothing natural about White decline. The answer is White racial organizing on our own behalf and the political will to confront the elites in Washington who are quite literally killing us and laughing about it.