The National Justice Party Demands Justice for Those Killed and Injured in the brutal Anti-White Terrorist Attack in Waukesha, Wisconsin 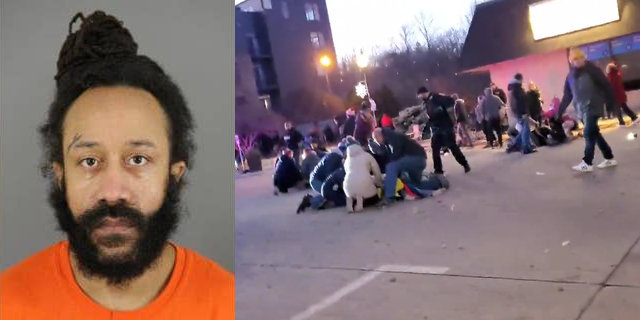 NJP HEADQUARTERS – Just two days after the exoneration of Kyle Rittenhouse in a Wisconsin courthouse, a Black terrorist drove an SUV into a Christmas parade in the overwhelmingly White county seat of Waukesha, Wisconsin, just a few miles north of Kenosha. At least five people are dead and 40 wounded. Many of the victims are children.

The suspect has been identified as 39 year old Darrell E. Brooks of Milwaukee, a self-described terrorist and violent felon that rapped on the internet about Black racial grievance ideology and his desire to commit violence against White people.

The mainstream Jewish media has been busy trying to downplay the incident. So far major media outlets on both the left and right have refused to report on the racial and ideological statements Brooks posted publicly to social media, claiming that they have no idea what his motivations for the attack could have been.

In the immediate wake of the attack, prominent Jews and liberals on twitter wasted no time using the incident to further promote their false narrative about the Kyle Rittenhouse case, snarking about how the car was just defending itself from the unarmed children in the parade, making a false equivocation between the victims of this brutal attack and the violent anarchists that attacked and were shot by Kyle Rittenhouse. Others simply laughed and mocked White people, who can never be seen as victims according to anti-White racial ideology.

“This attack in the 90% White town of Waukesha by a Black assailant is a clear anti-White terror attack, possibly in retaliation for the lawful verdict finding Kyle Rittenhouse not guilty of all charges,” said NJP Chairman Mike Peinovich. “It is a horrific but predictable result of anti-White incitement by the Jewish media, fanning the flames of anti-White hatred and animus.

“Time and again, the US media paints White people as monsters and legitimate targets of violence and rage from people of color, and this is the result. We’ve been hearing for several years now about the non-existent threat of so-called White domestic terrorism, but when actual terrorism rears its head, White people are the victims, not the perpetrators. The refusal of the media on both the left and right to tell the truth about this incident is itself a form of anti-White activism and reveals that their true motivation is to present an anti-White racial and political narrative as fact, rather than to report objectively on the news,” Peinovich said.

Perhaps even more disgraceful than the mainstream liberal media, has been the conservative press, who, knowing that their audience is outraged and feels victimized by the attack, have been trying to find any reasoning for the attack other than racial terrorism.

“This is an unimaginably horrific tragedy and our deepest condolences go to the families of the victims.” said NJP Secretary Warren Balogh. “But it must also be said that one of the most disgusting aspects to this story has been the reluctance, or absolute refusal, of so-called conservative news outlets to even mention the racial aspect of this crime.

“I fully expect liberal mainstream media to bury the true story of this anti-White mass casualty attack by a BLM terrorist, but for conservative outlets to conceal it shows they are false opposition determined to act as gatekeepers against White people awakening to the threats we all face,” Balogh said.

The National Justice Party demands that Darrell E .Brooks be charged with terrorism and hate crimes along with the inevitable charges of murder and assault he will be facing. We further demand that Brooks be executed when he is found guilty in a court of law.

The National Justice Party also demands that the mainstream media stop with the lies and the coverups and tell people the truth about the anti-White racial motives behind this attack.

The National Justice Party is a political organization headquartered in Pennsylvania, and is the only party that explicitly represents the interests of White Americans. The NJP advocates for White civil rights, the working and middle class and traditional families. See our platform to find out more about our issues.