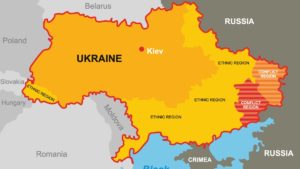 On Feb 23, 2022 Russian President Vladimir Putin announced a “special military operation” in Ukraine. There have been reports of missile strikes at military sites inside of Ukraine and fighting between Russian and Ukrainian troops has been reported outside a major Kiev airport.

The Ukrainian government has responded by declaring unrestricted martial law in the country and has put unspecified restrictions on social media use and the spread of “destabilizing” information by Ukrainian citizens. It is not clear if the Ukrainian military is willing or able to mount a coordinated or effective opposition to Russia at this point.

The National Justice Party hopes that the situation can be resolved with as little bloodshed as possible on all sides and considers the spilling of any Russian or Ukrainian blood a tragedy. We reject the false and childish narratives about the conflict that are being promoted in Western media and place the lion’s share of blame for the escalation on the shoulders of the US and NATO, who have instigated this crisis from the beginning and cynically lied to their own citizens.

President Biden has vowed to make Russia pay a steep price, but the only people he is capable of making pay anything are Americans and European citizens. Oil and natural gas prices are expected to spike even further as a result of the conflict, placing the burden for US/NATO geopolitical games on ordinary Americans and Europeans who have no interest in a hostile relationship with Russia. On February 22nd the German government, under orders from NATO, revoked the certification for the Nordstream 2 gas pipeline from Russia to Germany, thus putting the project that would alleviate the energy bills of millions of Germans in further jeopardy.

The humanitarian rhetoric and pledges to take in massive numbers of refugees that usually accompany such conflicts are completely absent in this case due to the White racial identity of Ukrainians. The UN has only received 9% of the already tiny $190 million budget they have asked for to help with any refugee crisis. In sharp contrast to their position on non-White refugees, Sweden has said it will refuse to take large numbers of Ukrainian refugees, and any refugees that enter Sweden will be deported as soon as possible. According to Atlantic Council analyst Michael Bociurkiw, European governments and Ukrainian President Zelensky are both urging Ukrainians not to flee into Europe because Europe is already saturated with refugees.

It is not clear the extent of the Russian intervention or what the final status of Ukraine will be, but one thing is clear. The entire situation could have been avoided if the US government actually listened to the desire of American citizens on foreign policy. Polling has consistently shown that Americans oppose the idea of the US “spreading democracy” abroad, which is the excuse used not just for open aggression like the Iraq War, but for staging coups and political black ops in foreign countries like Ukraine. 74% of Americans oppose a major roll for the US in the Ukraine conflict and only 23% trust the US intelligence community according to a recent poll.

Roots of the Crisis

The current crisis in Ukraine is the result of several years of provocations and political black ops using Ukraine as a staging ground. The narratives that are unanimously repeated by Western media about the crisis and the “democratic” nature of the Ukrainian state are all completely false.

The current situation can be traced back to 2013 when Victor Yanukovich, the pro-Russian President of Ukraine refused to sign a political association and free trade agreement with the European Union. In response US-backed protesters staged months long violent demonstrations that killed at least 130 people and culminated with rioters taking control of Ukraine’s capital building and staging a coup against Yanukovich. The US government, who condemns the January 6th protesters as violent terrorists, openly praised these “masked militants” and declared their action a victory for freedom and democracy.

The removal of Yanukovich was justified by a bloody incident that has come to be known as the “Sniper’s Massacre” in which up to 100 anti-Russian protesters were killed by a group of as yet unidentified gunmen. The West initially claimed that this massacre was committed by pro-Russian security forces, but several international investigations have cast doubt on this. In 2020, Ukrainian President Zelensky said that all documents and media relating to the massacre had been lost and that the scene had been cleaned up, making any further investigation impossible.

The 2014 coup resulted in a protracted civil war in Eastern Ukraine and the Russian invasion of the Crimean peninsula to bolster its military position on the Black Sea. Two ethnic Russian regions of Eastern Ukraine, known collectively as the Donbass, declared independence and voted to separate from Ukraine. The West called these votes a sham while simultaneously proclaiming the post-coup Ukrainian elections, in which the Donbass and other pro-Russian regions could not vote, yet another “triumph” in a long and tiresome series of triumphs for “democracy.”

This precarious situation continued until October of 2021 when the NATO-backed Ukrainian government received a shipment of high tech drones from NATO ally Turkey and used them in an attack on the Donbass, a move which was praised by the Voice of America, which spouts the propaganda line of the DC foreign policy establishment. According to the cynical US line, drones were not specifically prohibited by any ceasefire agreement, so it was valid to use them to fire on pro-Russian forces.

Putin seized on this provocation to mass Russian troops at the border of Ukraine and demand concessions such as a guarantee that Ukraine would never be admitted into NATO and that the West stop arming Ukraine. President Biden responded with a total refusal to negotiate and a promise to destroy the Russian economy. On Monday February 21st, the Russian Duma voted to recognize the independence of the Donbass and Putin quickly moved to establish a military presence in the region, citing a request from the now independent governments for security assistance. The US responded once again with threats of sanctions, threats which completely failed to faze the Kremlin and made America look absurd. On February 23rd, Putin launched his military operation in Ukraine.

In an address to the American people, Biden said that any sanctions would be targeted specifically at the Russian economy and would spare Americans hardship, but no serious person believes a word of it. For the last several weeks liberal news outlets have been publishing a series of weak editorials attempting to muster public opinion behind the idea that Americans and Europeans must suffer for the sake of “democracy” in Ukraine.

When asked why Americans ought to sacrifice for a political conflict they don’t care about, White House press Secretary Jenn Psaki took on the rhetoric of former President George W. Bush and spouted the cynical neoconservative talking point that

“This is about standing up for American values.”

“We have repeatedly throughout history been leaders in the world in rallying support for any effort to seize territory from another country,”

This tone deaf appeal has only further enraged ordinary Americans at the sheer arrogance of the government in Washington.

US condemnation of Putin’s decision to invade Ukraine smacks of rank hypocrisy given the much weaker case that the US made for its own Zionist inspired invasion of Iraq in 2003, and the subsequent shattering of the already fragile stability in the middle east. Due to decades of obsequious subservience to Israel as it carries out attacks on its Arab neighbors and ethnic cleansing of the Palestinians, combined with a constant barrage of sanctimonious appeals to democracy and human rights, the United States simply cannot command any moral authority on the world stage any longer. Many people around the world have sided with Putin simply for the satisfaction of seeing the US get a black eye.

Whatever your opinion of the character of Vladimir Putin or his government, Russia is a sovereign state that has a right to demand that a country on its border not be used as a staging ground for political intrigue and covert black ops. The situation could have been avoided if the United States and NATO were willing to meet Russia halfway on their security demands, and had they not staged the illegitimate coup of 2014 which set these events in motion in the first place.

The average American or European has no interest in whether the President of Ukraine is pro-Russian or pro-Western, and no one in any country ought to die for the power games of an unelected foreign policy elite. Ironically, by retaliating against Ukraine for not signing a treaty that would create more economic integration between Ukraine and Europe, the West has created a situation in which it is now destroying the economic integration between Russia and Europe. By overthrowing the government of Ukraine in response to their refusal to sign a free trade agreement, the US and NATO have put themselves in a position where their only move is to disrupt world energy markets, causing even more supply chain disruptions and driving even greater inflation due to spiking fuel prices.

The inability of the US to deter Russia will have ramifications not just for world geopolitics, but for the domestic treatment of Americans, particularly White Americans, who are viewed by elites as nothing more than an obstacle to be ignored or silenced. The consistent refusal of Americans to back Washington’s war policies has enraged the political class, who no doubt relish the idea of making normal people suffer economic hardship as revenge for their own impotence and humiliation.

The National Justice Party opposes any further escalation of the conflict in Ukraine, demands that the US stop blustering on the world stage, destabilizing countries, using economic hardship as a weapon and and putting innocent people in danger. We stand for a foreign policy of peace and respectful engagement between nations. Rather than further sanctioning the wallets of Americans and Europeans, the United States and its NATO allies must come to terms with Russia and stop using the Ukraine as a staging ground for covert destabilization operations.