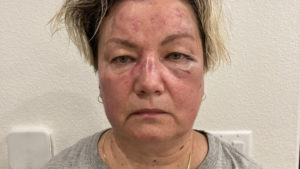 Early Sunday morning, Victoria Partridge was brutally assaulted in her Uber by a pack of black women during a ride in Las Vegas. When she arrived at the destination, the women threw a drink at her, punched her in her face as she shrunk in the corner and begged them to stop, then stole the change in her cupholder and dented her car door.

Partridge’s experience is a common one for white service workers, particularly female ones. A local report on Partridge’s experience notes that she was hesitant to pick up the group of 7 rowdy black women, but under Uber’s “Zero Tolerance for Racism” policy passing up on the ride for safety concerns would’ve likely led to a racism charge and her losing her job.

After the assault, Partridge notes that she contacted the Las Vegas Metropolitan Police Department and filed a report. Partridge’s in-car security camera filmed the entire assault and the app system makes it easy to track down the suspects, yet the exasperated victim told reporters that the LVMPD has shown no interest in this evidence, her case, or making any arrests.  In other words, this woman was subject to an unprovoked felonious assault and robbery, and the police are not even interested in acknowledging it happened.

There are several moral and social debates about America that this incident provokes.

What kind of country creates the type of economic and familial circumstances that compel a 55-year-old woman to become a nighttime taxi driver in Las Vegas? Why do the rank and exploitive Judeo-capitalist middlemen who run companies like Uber have zero sum race policies that everyone, including the CEOs, knows jeopardize the safety of their contract workers, especially after the Christina Spicuzza tragedy? Why does a woman beaten so badly her face is covered in bruises and scars show up to the police station with video and information about the attack and nobody cares?

Anyone with white working class women in their family knows the sheer terror that overcomes them every time they are forced to travel into the city to work. In New York City, even urban professional lifestyle liberals are doing everything in their power to avoid having to travel on the subway to get to their offices due to the very real fear of being murdered or raped by unchecked black savagery.

If you are white in America, you are either invisible or institutionally demonized. If you dare to complain or demand justice, supposedly responsive institutions tell you to shut up or else. You are a pinball being slapped and banked off multiple failed institutions, all of which rack up extra points from our rulers in Washington, California and New York for victimizing you further.

Both Democrats and Republicans have been painstakingly avoiding the topic of crime, and thus preventing talk of a solution to it, by dunking general public safety concerns that impact all races into minoritarian identity politics, such as discourse about “black on black crime” or “anti-Asian hate crimes.”

It is true that Asians are heavily victimized by black violence due to proximity in big cities, but the same is true for white people. Yet the latter group is ignored not just by politicians, but now most disquieting, even the police!

What is the practical cost of public figures pretending white people don’t exist in the name of political correctness or “civility?” What is the price of your group shrinking to minority status yet not being organized to compete in the rainbow of competing racial nationalisms that is the driving force of internal power dynamics in 21st century America?

Take one look at Victoria Partridge’s face and you have your answer.