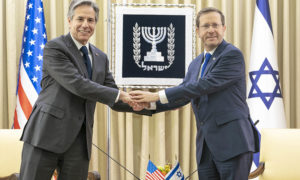 Last May, an Al Jazeera journalist who held American citizenship went to report on an Israeli military raid on a Palestinian refugee camp in Jenin.

The woman, 51-year-old Shireen Abu Akleh, who was wearing a helmet and bulletproof vest with the word “PRESS” on it in large letters, was suddenly shot in the head by an Israeli sniper. Her producer, Ali Samoudi, was shot in the back but survived.

Abu Akleh has long been a thorn in the side of the Israelis. Her bold and courageous journalism, which puts the spotlight on the Zionist mass murder of disarmed civilians of the West Bank (armed groups like Hamas mostly operate in Gaza), unambiguously shows that America’s support for Israel is illegal under the Leahy Act.

For this reason, even CNN has been forced to admit that the death of Abu Akleh was a targeted assassination.

Yet the State Department, overseen by the Jew Antony Blinken, has released an outrageous “inconclusive” report on this incident.

In the statement, spokesman Ned Price acknowledges that Abu Akleh was killed by Israeli gunfire, but found “no evidence” that the Jewish sniper who shot a middle aged woman in the head did so intentionally.

According to the State Department, the bullet used to kill the journalist was too mangled to pinpoint who exactly shot it but knows it was just an accident. This OJ Simpson style of defense argument, as others have pointed out, stinks of a coverup.

The raid on the camp was filmed from various angles, there were several eyewitnesses, and several independent investigations, including one by the Associated Press, have found that none of the Palestinians had firearms or shot back at the Israelis, making the State Department’s focus on studying the bullet in question a sleight of hand.

As for the concern for “intention,” we can only observe what the Israelis did when Abu Akleh was being laid to rest a month later. During the funeral, which Al Jazeera televised live around the world, Israeli security forces charged the group of mourners and began beating the men carrying Abu Akleh’s coffin, causing them to almost drop it. 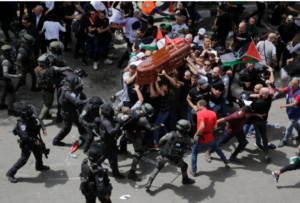 A regime that sends its thugs to beat on pallbearers carrying a journalist they are suspected of murdering on live television can only be operating under the assumption that they are above the law.

Who can blame them? According to the “human rights” preachers in Washington, Israelis can kill American citizens with impunity, for Jews are above the law no matter where they are.