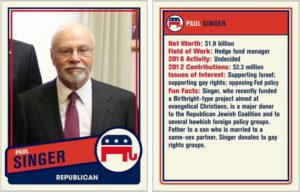 Fast forward to 2022. Big money is being spent by the institutional GOP to reanimate William F. Buckley’s Jewish funded oil-and-water formula of hawkish foreign policy crusades, religious fundamentalism, and a libertarian approach to domestic statecraft paired with the worship of mercenary capitalism.

Figures involved in this pseudo-populist attempt at steering Republican voters back to the status quo include Ron DeSantis, Matt Walsh, Glenn Beck, Ben Shapiro, and several 2016 “Never Trumpers” who have attempted to pique the interest of social conservatives on questions of abortion or transgender kindergarteners in order to lure them back into the stands to watch the goofy elephant perform throwaway tricks in Washington’s queer Israeli anti-white circus.

In light of this, it would be a tactical debacle for the Republican Party — which now has the means to reverse the Supreme Court’s voiding of the 1996 Defense of Marriage Act — to vote to make gay marriage the permanent law of the land in an election year.

And yet, five days ago, 47 House Republicans, including the chair of the supposedly “far right” House Freedom Caucus, voted with Democrats to pass the “Respect For Marriage Act,” which enshrines homosexual matrimony as federal law.

The bill is now going to the Senate, where the Democrats need 10 Republicans to pass it up to Joe Biden.  Figures such as Wisconsin’s Ron Johnson, who presents as a maverick, has tepidly agreed to vote for something his supporters do not want. Only one of seven Wisconsin Republican Representatives backed this bill in the House.

A number of paleo-conservative and reactionary right commentators, such as Declan Leary, have written columns expressing angry befuddlement at GOP capitulation on such a fundamental issue. According to Leary, whose job it is to sell the Republican party to his readers while pretending not to, the GOP is composed of “jelly-spined, soft-bellied, limp-wristed” wimps.

This is a standard and oft-repeated soft critique of conservative politicians by conservative salesmen when the product they are hocking keeps failing the customer. The idea is that a Republican Senator in a deep red state like John Thune is being bullied by liberal activists and the New York Times into violating his conscience because he is afraid of being unpopular.

This logic is a naive (or deliberately misleading) understanding of how the Republican Party actually works. Conservative figures like Liz Cheney and Adam Kinzinger, who are hosting the widely hated and panned January 6th Committee, have demonstrated a willingness to tank their political careers and endure social ostracization. Simply observe the entire Republican Party, from top to bottom, morph into racial slur hurling knuckle dragging apes when a member of the “Squad” makes a remark mildly critical of America’s relationship to Israel.

Clearly, there is another factor at play: plutocratic, especially Jewish, money.  Your elected official’s votes are for sale!

Gay marriage was never supported by an electoral majority. DOMA’s ban on gay marriage enjoyed bipartisan support and was signed into law by Bill Clinton.

Suddenly in 2011, when America’s real rulers decided it was time to implement their latest cultural attack on normal people, the Republican Party (and by extension the conservative movement) was bribed by Jewish Wall Street speculators to throw the gay marriage fight.

These obscenely wealthy Zionist “LGBT” activists, among them Paul Singer, Clifford Asness, and Steve Cohen, continue to use their Jewish networks to coordinate donations of several millions of dollars into the gas tank of the Republican Party machine. Unlike the people who continue electing and re-electing Ron Johnson and John Thune, Jews are ready and willing to pull their financial support if they don’t get exactly what they want.

At this point, we all notice the pattern. When Republicans take over Congress and the Executive, the Supreme Court does all the governing. When they get a lopsided majority in the Supreme Court, then Congress gets more active. Conservatives are paid to collect white indignation, energy and money, then deflect it in an irrelevant (and often moronic) direction until its spent, all while the country collapses all around us.

The gay marriage bill is a well-crafted chess move timed by the Democrats to force the GOP to choose between their Jewish donors and their fragile attempt at crafting a racially left-wing,  religious and socially conservative pseudo-populist voting bloc as the midterm’s approach.

The smart move would be to find out how to shelf the bill and wait until the elections in November are over to pass it. But will Paul Singer have the patience for this? The gust of wind is clearly blowing in one direction.

Never underestimate how little respect the GOP has for its supporters. Conservatism is a scam, a Nigerian Prince, political three card monty.

Those who tell you there are “no alternatives” are only rationalizing a sunken cost fallacy from playing a rigged Claw Game. Patronize the large constellation of carnival booths in American conservatism and you will get nothing in return, guaranteed.

Senate Republicans’ panic subsided last week when Chuck Schumer announced that he would postpone the vote on the Respect for Marriage Act, which would officially codify both gay and interracial marriage as federal law, until […]