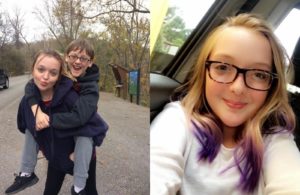 A GoFundMe has been set up to help Allison Parker’s three kids, orphaned after their mother was murdered by a Black terrorist in Memphis on Wednesday night.  If you wish to contribute, you may click here.

All members, volunteers, and supporters of the National Justice Party mourn the death of Allison Parker, the 38-year-old White nurse who was cut down in front of her daughter by Black terrorist Ezekiel Kelly in Tennessee. Her 20-year-old daughter Ariana watched helplessly as her mother was shot repeatedly at Poplar Avenue and Evergreen Street in midtown Memphis, before carjacking their SUV to continue on his eight-hour murder spree.

Allison worked for Family Practice Center of West Memphis, where she was a nurse for 17 years. One of her former patients described her as “just the sweetest, gentlest, kindest person you’d ever want to meet.” Her two daughters and young son lost their father two years ago, when he was only 39 years old, meaning the three children are now left orphaned before either of their parents even reached the age of 40.

Allison Parker’s death is directly the result of Black psychotic Ezekiel Kelly’s early release after having been charged with attempted first-degree murder, reckless endangerment, and possession of a firearm with intent to commit a felony in 2020. He pled guilty to the lesser charge of aggravated assault and was sentenced to a ludicrously short sentence of three years in June 2021, but was then released for “good behavior” in March of this year, having served only 11 months.

Allison’s death comes less than a week after another White mom was savagely killed by another Black terrorist in Memphis. Eliza Fletcher, a 34-year-old mother of two, was out jogging the morning of Friday, September 3rd when she was violently abducted and later murdered by career criminal Cleotha Henderson. Fletcher was a billionaire heiress, the granddaughter of hardware magnate Joseph Orgill III, but unlike so many members of her class, she was a devout Christian who was described by a friend as “beautiful, kind, beloved in the community, mother of two boys, avid nature lover, and a kindergarten teacher at the school she had gone to, St. Mary’s.”

Cleotha Henderson beat Eliza Fletcher to death in the back of his car, then dumped her body in a garbage bag. The 38-year-old Black has a long rap sheet, having been arrested 16 times between 1995 and 2000 for charges including aggravated assault, burglary, and rape. At age 14, he raped an unnamed victim, and at age 16, abducted an attorney at gunpoint. Henderson served 20 years of a 24-year kidnapping sentence and was back on the streets in 2020. Since his arrest for Fletcher’s abduction and murder, he has since been charged with a 2021 kidnapping and rape because of DNA evidence linking him to the crime.

The fact that Fletcher, a billionaire heiress, was not robbed by her killer, shows how the issue of race transcends class and economics. Both Allison and Eliza were of a type–the best of White women–and their killers were both of a type of Black male that is all too common among that race.

Both Allison and Eliza are victims of the racial war on Whites that unleashed Black terror on the rest of the country ever since the summer of 2020, a bloody climax of decades of institutional ethnic cleansing of Whites that transformed Memphis from a 63% White/37% Black city in 1950, to the crime-ridden 25% White/64% Black hellscape it is today.

Both Democrats and Republicans are responsible for this racial terror and replacement, most recently through so-called “criminal justice reform,” which unleashes Black killers and rapists back onto the streets. President Donald Trump infamously signed into law the First Step Act in December 2018, enacting “several changes in U.S. federal criminal law aimed at reforming federal prisons and sentencing laws in order to reduce recidivism, decreasing the federal inmate population.”

While Trump ignored the populist demands of his White base, he passed this dangerously irresponsible, unpopular bill explicitly at the urging of his Jewish son-in-law Jared Kushner, according to Mitch McConnell and future Biden Chief of Staff Ron Klain:

Mr. Trump called for his son-in-law, Jared Kushner, the administration’s driving force behind the bill, to join the meeting and hear the news himself. As Mr. Kushner entered the Oval Office, Mr. McConnell joked that he felt like he had heard from everyone Mr. Kushner knew. . . . “The bipartisan coalition was there before Jared showed up,” said Ronald A. Klain, a former senior official in the Obama and Clinton administrations. “The Koch brothers deserve credit for that. But if Jared got the president to be for it, that is a key part of getting it done, and he does deserve credit for that.”

In May 2021, Republican governor of Tennessee Bill Lee signed two bills into law, calling it a “monumental” day for his “signature” cause of criminal justice reform:

Lee speaks often about his passion for criminal justice reform. He said the issue was “planted in my heart” some 20 years ago, when he began working with a prison ministry that paired inmates with mentors.

The city of Memphis is represented by two Jewish congressmen, both of whom are complicit in the terroristic policies targeting White Tennesseans.

Democrat Steve Cohen, who represents three-fourths of the city of Memphis, was a member of Zionist fraternity during his time at Vanderbilt and went on to become “easily the most progressive member of the Tennessee delegation, and arguably one of the most progressive congressmen ever to represent the state.” Cohen announced he would bring articles of impeachment against President Trump for saying there were “very fine people” on both sides of the Charlottesville, VA protests in August 2017, saying “There are no good Nazis. There are no good Klansmen.”

Republican David Kustoff, Cohen’s Jewish colleague representing the rest of Memphis, burnished his right-wing bona fides by supporting the effort to overturn the 2020 election results. However, this posturing belies the fact that Kustoff is close friends with and a former classmate of Memphis mayor Jim Strickland, an anti-White Democrat who endorsed Michael Bloomberg for president and pushed to pull down the statue of General Nathan Bedford Forrest, saying the statue no longer represented “who we are as a modern, diverse city.” Kustoff even formed a law firm with Strickland in 1998 and introduced Strickland to his wife, Melyne!

The White people of Memphis are now bearing the awful and bloody cost of the systematic treachery of their public officials in favor of obedience to Jewish interests. Black criminals feel emboldened to act on their savage impulses without fear of consequences. Ezekiel Kelly partially livestreamed his murder spree, which left two others dead and several wounded, while mugging for the cameras before, during, and after the killings. A screenshot of the killer’s livestream shows him grinning evilly, with kinky hair fanning out like a Black demon out of hell. He smiled ghoulishly again as he was taken into custody, and again in his mugshot after arrest.

In a sign of how badly the city of Memphis is spiraling out of control, Black 17-year-old Corteria Wright was originally thought to have been killed by Kelly during his murder spree, but is now known to have been shot and killed in an unrelated incident on the same night. Police are still looking for a suspect. And in a grim indication of how often these killings have become commonplace in the last decade, Allison Parker shares the same name as a young, blonde news reporter for WDBJ7 Roanoke who was gunned down by another livestreaming Black killer in 2015 who was hopped up on racial hatred and resentment.

The National Justice Party calls for the swift application of the death penalty to Ezekiel Kelly and Cleotha Henderson, along with all other Black rapists and murderers being treated with kid gloves by the anti-White system. We condemn in the strongest possible terms any criminal justice reform that sacrifices innocent White moms like Allison Parker and Eliza Fletcher in the name of an impossible and unjust “equity.” And we condemn the cowardice of Republican elected officials who refuse to stand up for their White base against the open racial war of terror being waged against them.