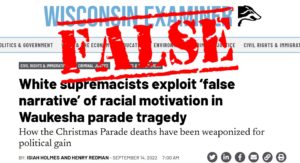 Our fact-checkers found four false claims, just in the title!

Claim: Darrell Brooks had no racial motivation and saying so is a false narrative.

NJP co-founder Joseph Jordan was the first to break the story of Darrell Brooks’ anti-White statements and BLM political affiliations, less than 24 hours after the parade attack. Jordan confirmed Brooks made rap videos on Soundcloud under the name “Mathboi Fly” with lyrics emphasizing “black racial grievance, hatred of white people, and the open support of terrorism and crime.” Videos showed Brooks brandishing guns while rapping in front of the SUV later used in the parade attack, while his lyrics extolled “Black power.” In one song, Brooks referred to himself as a “terrorist.” He also posted memes to social media depicting violent revenge fantasies against White people, and in a Facebook post in June 2020, he encouraged his followers to commit random acts of violence against elderly Whites.

This story was later picked up, and evidence of Brooks’ anti-White motivations was confirmed, by mainstream outlets such as the New York Post, Fox News, the Toronto Sun, and the Daily Mail. None of this evidence has been refuted or even addressed by the Wisconsin Examiner, Waukesha police, or any other outlet labeling it a “false narrative.”

Claim: What happened in Waukesha was a “parade tragedy,” not a terrorist attack.

The deliberate mischaracterization by the Wisconsin Examiner and other media of what happened in Waukesha on November 21, 2021, as a “parade tragedy,” rather than a terrorist attack, is pure anti-White denialism that dangerously seeks to minimize and excuse anti-White crime. Even Wikipedia, which studies have shown has a marked left-wing bias, calls what happened in Waukesha a “Christmas parade attack.”

Meanwhile, the Wisconsin Examiner features an entire section on its website describing the events of January 6, 2021, as an “attack,” even though all five of the people who died during the Stop the Steal rally were Trump supporters, and all likely died through government actions.

This false contextualizing and relabeling of a mostly peaceful protest by White Trump supporters as an “attack,” while a car-ramming attack by a BLM extremist against children and grandmothers is called a “parade tragedy,” denies Black guilt, delegitimizes White victims, and exposes a dangerous double-standard that dehumanizes and devalues the lives of White people.

Claim: The NJP is “exploiting” the Waukesha attack.

The National Justice Party is an organization dedicated to White civil rights. Innocent White people, including children and the elderly, were deliberately targeted by a BLM terrorist in Waukesha with a car-ramming mass casualty attack. This attack was clearly patterned off an anti-White terrorist attack in Germany on December 16, 2016, when an asylum seeker from Tunisia named Anis Amri deliberately drove a truck into a Christmas market in Berlin, killing 12 and wounding dozens of ethnic Germans.

How could one advocate for White victims of hate and terrorism without being accused of “exploiting” these crimes? Did the Wisconsin Examiner ever accuse Rev. Al Sharpton or Jesse Jackson of “exploiting” the death of George Floyd, or “weaponizing” Mr. Floyd’s death for “political gain”? The answer is no, and this is because the paper is lying to support an anti-White bias.

Claim: The NJP is composed of “White Supremacists.”

The first point of the National Justice Party platform calls for the rights of historic American minority populations to be respected. Point 25 of the platform calls for the right to self-administration by all racial groups living within the United States, and declares “No longer will any race be exploited for the benefit of another in America.”  The NJP is composed of White advocates, not White supremacists.

This article is so replete with distortions and falsehoods that it would be an exercise in redundancy to refute them all. The NJP will continue to hold journalists and law enforcement accountable for their lies surrounding the Waukesha attack, and we will continue to demand justice for victims of all anti-White crimes.