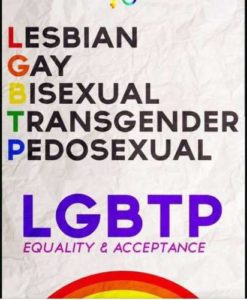 Senate Republicans’ panic subsided last week when Chuck Schumer announced that he would postpone the vote on the Respect for Marriage Act, which would officially codify both gay and interracial marriage as federal law, until after the midterm elections are over.

For the bill to pass the filibuster threshold, Democrats need 10 Senate Republicans to vote for the bill. The strategic addition of an interracial marriage clause creates complications for conservative lawmakers who, even if they are willing to oppose homosexual matrimony, are deathly afraid of being called “racist.”

When explaining the rationale for postponing the vote on this symbolic law until after the midterms, the bill’s sponsor, Wisconsin Democrat Tammy Baldwin, said that it would be impossible for Republican legislators to vote in favor of gay marriage when they are up for re-election.

The first is that the Republican Party, which has donned the garb of Christian fundamentalism in an attempt to pull their White voters away from race-inflected populism, is making backroom promises to the Democrats that they will betray their religious and socially conservative constituents as soon as these suckers re-elect them.

The second brings into question the legitimacy of recent Gallup polls claiming that 71% of all Americans, including two-thirds of voters in battleground states, are strong supporters of homosexual marriage.

If these numbers are real, then such a lopsided public consensus demands candidates in close races shout out loud an enthusiastic endorsement of gay matrimony. Yet it has not materialized. Out of 50 Republican Senators, only three have publicly endorsed the Respect For Marriage Act–Rob Portman (OH), Thom Tillis (NC), and Susan Collins (ME)–all of who have announced their plan to retire when their terms expire.

The 2022 Republican bench has largely been selected and there are no hyper-ideological primaries left, yet the pro-homosexual and pro-interracial marriage law is still being treated like it is radioactive.

A group of homosexual conservative lobbyists have launched a campaign to try and pressure candidates frightened to be seen anywhere near America’s increasingly grotesque LGBT movement. They tout 400 Republicans who have signed their letter demanding the bill gets passed now, but aside from Mehmet Oz in Pennsylvania and Joe O’Dea in Colorado, none of these GOP apparatchiks will have to face voters this November.

We can only conclude that strategists for the Republicans and Democrats (who rely on socially conservative minority voters) do not believe supporting gay marriage is a popular policy. Nevertheless, after the midterms, they plan to have a successful bipartisan vote to pass the Respect For Marriage Act on orders from their wealthy donors.

Public dissent or disapproval of these sacred cows guarantees immediate punishment, which naturally makes subjects of polling hesitant to express their real beliefs to strangers. Tourists who visit Cuba find a similar phenomenon when the locals they interact with clam up when asked to give an opinion on their government.

One example of polling being wildly out of step with the electorate’s genuine sentiment was the 2000 Alabama interracial marriage referendum.

33 years after Loving v. Virginia, activists lobbied the state of Alabama to put its unenforced constitutional ban on miscegenation up for a popular referendum, under the assumption that a supermajority would repudiate “racism” and they would be able to celebrate a moral victory.

Their assumption was well substantiated. A 1999 poll found that only 26% of Alabamans supported keeping the ban on racial mixing on the books. Several other polls in the run-up to the referendum found similar numbers.

But when the ballot measure was put to the test, liberal activists’ jaws dropped as a whopping 41% voted to ban interracial marriage.

A majority of voters in 24 of 67 counties backed the prohibition. There were other areas, including parts of the state’s capital of Montgomery, where the issue was roughly 50-50.

Ultimately, the idea that support for interracial marriage was a settled, uniform consensus was shown to be a “public position” manufactured through fear and intimidation.

Even surveys claiming 93% of Whites approve of race mixing, according to Jewish academics who study White sentiment, should be taken with a grain of salt.

All of the major figures of the conservative movement, from Donald Trump to the establishment GOP, are in lockstep behind making gay marriage the law of the land. Why are they so quiet?

A representative democracy where candidates reschedule legislation to avoid voter scrutiny? What is the point?

Conservatism Is A Scam: The Coming Gay Marriage Vote