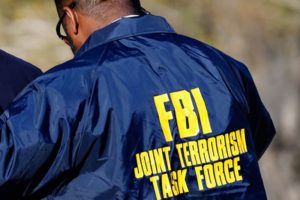 According to the FBI, Ryan is a “white supremacist domestic extremist.”

What betrays this characterization of the young man is the federal criminal complaint they filed against Ryan, which only charges him with one count of the process crime of making a false statement on a government document.

The affiant, 33-year-old FBI JTTF Task Force Officer Tyler J. Newman, claims Ryan committed a crime when he filled out a Department of Defense security clearance application in 2020 and wrote in a comment bubble that he was estranged from his father and hadn’t seen him in 10 years.

Ryan’s biological father, Richard Matthew Dillard, is a felon with a criminal history in multiple states. FBI JTTF officer Newman alleges that Ryan committed the crime of lying on a federal form after the FBI used its investigatory resources to find the accused’s Instagram profile, where they assert that he had uploaded a picture of himself hugging Dillard from when he was in high school.

In and of itself, the case is an absurdity. Mark Zaid, a lawyer who specializes in security clearance law, told Rolling Stone that prosecutions of this nature are virtually unheard of, and even remarked (albeit in an approving tone) that the case was clearly politically motivated.

Later in the court filing, the real reason for Ryan’s arrest was mentioned. Ryan belonged to an anonymous chatroom that had a federal informant surveilling its conversations. At one point, Ryan is alleged to have written “I serve for combat experience so I’m more proficient
in killing niggers.”

This throwaway comment, likely said in jest, is protected by the First Amendment and did not rise to the level of a criminal threat as the FBI did not charge him for it. Despite being irrelevant to the case, it was included as an anecdote in the document charging Ryan with making false statements.

Developments in the case show that the FBI has been stubbornly guarding information about the chain of events that led to Ryan being surveilled and later arrested for a completely unrelated non-violent crime allegedly committed two years ago. Ryan’s legal team has filed two Brady requests attempting to compel US Attorney Barbara D. Kocher to release potentially exculpatory evidence used to build the case against the defendant, one of which was granted.

This case fits a pattern that a number of FBI whistleblowers have brought to Congress’ attention: the FBI is being given orders to squander law enforcement resources by framing random White men as domestic terrorists despite lacking sufficient evidence to do so.

The goal of the fraudulent practice, according to whistleblowers, is to manufacture deceptive statistics portraying right-wing White people as terrorists so that the US government and the Anti-Defamation League can build media hysteria to justify suppression of their critics and political opposition.

There is a twist to this story. The FBI operative who built the petty case against Ryan in retaliation for allegedly talking about “killing niggers” in a chatroom himself literally killed a Black man in a controversial 2019 police shooting.

According to media reports on the incident, a Black man named Treva Smutherman was transported to Cape Fear Valley Medical Center in Fayetteville, North Carolina, suffering from medical problems. After arriving at the hospital, police allege that Smutherman began fighting with a deputy. During the scuffle, Tyler Newman, then a Fayetteville Police Department detective who was standing nearby, unloaded several shots into Smutherman, killing him.

FPD at the time stated that Smutherman was wrestling for the police officer’s gun and grazed the officer’s leg with a round.

Two weeks later, their story came into question when video capturing audio of the struggle from the next room was leaked to social media.

Smutherman’s family has attempted to obtain police body camera footage of the incident, but the police department responded that it does not exist because they do not wear their cameras inside hospitals. The hospital’s director has also refused to show them their surveillance footage of the shooting.

While the exact details of the case are still not known, Newman’s shooting of Treva Smutherman continues to be cited by Black grievance groups as an example of a racist police execution.

With what unfolded just one year later with the death of George Floyd, the FBI’s Tyler Newman narrowly avoided becoming America’s Derek Chauvin.

And with his deputization as an FBI operative, his priority is to hunt down 21-year-old, law-abiding White men for typing immature comments in the name of combating terrorism.