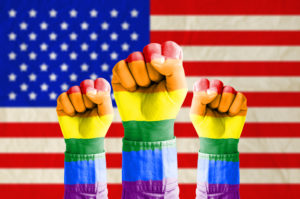 The dominance of leftists and self-identified homosexuals in American institutions is set to accelerate even further, according to new data released by the Center for Partisanship and Ideology (CSPI).

At Ivy League universities, surveys now show the current number of students who identify as LGBT is 27%, outnumbering a total of 10–15% of undergraduates at elite schools who are conservatives of any stripe. The number of individuals who identify as liberal or left-wing, in comparison, is now up to 75%.

Schools that show up on lists of highly conservative institutions, such as the University of Arkansas, have a larger share of self-identified Republicans on campus, but even in these cases, Democrats (41%) outnumber GOP supporters (36%).

Parents who seek to protect their children from negative social trends often opt for homeschooling or private religious instruction, but surveys show this may be in vain. In 2022, women educated in parochial schools were 11% more likely to identify as non-heterosexual than those who attended public school, while homeschooled young adults viewed themselves as LGBT at a slightly higher rate (3% higher) than average.

The data supports the theory that homosexual ideology is being propagated primarily through the heavy use of social media over any other variable.

In Christian sociologist James Davison Hunter’s 2010 book To Change the World: The Irony, Tragedy, & Possibility of Christianity in the Late Modern World, he remarked on the social and cultural irrelevance of America’s Evangelical Christians, 40% of the population, compared to the immense and seemingly omnipotent power the Jewish 2% wields. These stark differences were explained in part by Hunter observing that Jews have unique access to top universities, which serve as conduits for private and public officials who go on to govern national chokepoints such as finance, education, media, law, and politics.

According to CSPI data, Jews are now only 7% of students on Ivy League campuses, which represents a drastic decline in population that defies both historical statistics and anecdotal evidence. Eric Kaufmann, who is Jewish, admits in his analysis that the data could be inaccurate, as it only asked students if their religion, rather than ethnic background, was Jewish.

A 2017 survey found that 53% of Jews under 30 identified as irreligious Jews. In 2013, 27% of Yale students and 25% of Harvard students were ethnically Jewish. Jews continue to be radically overrepresented as heads of Ivy League institutions, with seven of the eight overseen by individuals of Jewish ancestry in 2021.

Conservatives and liberals in the United States exist in relative parity, but the already lopsided power differential in favor of the latter in America’s managerial institutions will widen in the near and medium future if these trends hold.

Join the US Military, Cracker…Please

Pssst…hey flyover white boy, I’m a military recruiter. I’ve got for you the opportunity of a lifetime. How would you like to see the Ukraine this time of year? Maybe Iran? Ever wonder what it’s […]

Families Against Wall Street: We Stand With The Railway Workers!

President Joe Biden refers to himself as the “most pro-union president in history.” The Republican party purports to stand in defense of family values. Yet, as negotiations between railway unions and private carriers break down […]