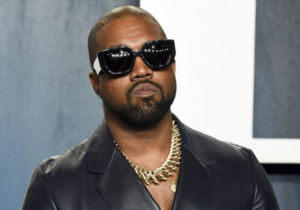 West sent a bold response in return: “Ima use you as an example to show the Jewish people that told you to call me that no one can threaten or influence me.”

We are supposed to take it for granted that West’s inference that Combs is a proxy of powerful Jews sent to try and bring him back under control is nothing more than a delusional madman’s ramblings, but the facts speak for themselves.

In 2020, Black celebrity Nick Cannon made statements on his show about Jewish people that upset the Zionist hawks at the Anti-Defamation League.

Following the incident, P. Diddy met with Cannon, where he explained the personal and career risks he was taking by angering the “White” people with big noses and actual power. He persuaded Cannon to meet with an Israeli music mogul and submit to humiliating public relations rituals in order to get his job back at Jew Shari Redstone’s Viacom.

Since the 1990s, entertainer and businessman Combs has relied strongly on his Jewish massah Andy Schuon, a titan in music and television who in 2012 ponied up a massive “angel investment” in Revolt TV, a cable channel dedicated to combining rap music with “woke” Black Lives Matter anti-White activism.

Attacks from other Black celebrities against Kanye don’t end there.

Earlier today, another ostensibly Black-owned company, Springhill Company, announced that it would not be airing a recent episode of its TV show, The Shop, which featured an interview with West.

In their public statement, the company’s Black CEO stated that they had given West a chance to apologize for his statements about Jews, but that he had doubled down instead, so they decided the show will never see the light of day. They also made sure to mention that basketball star LeBron James, a host on the show, was never in the same room as West.

Here too we find the fingerprints of the Jew. While CEO Maverick Carter and LeBron James are the faces of Springhill, Jewish capitalists such as Fenway Sports Group (Tom Werner, David Ginsberg, Michael Gordon) are the company’s shareholders.

Diddy and LeBron aren’t the only left-wing, Black celebrities knee-deep in Jews. Figures such as John Legend and Tom Morello have tripped over one another to loudly break racial solidarity with Kanye, showing that the only color they’re interested in at the end of the day is green.

The obstinate Kanye, who is allegedly worth $2 billion, is creating a serious problem for America’s real rulers. Gentle persuasion and canceled contracts aren’t shutting him up, so now they have no choice but to up the ante.

West’s ex-wife Kim Kardashian clearly thinks that somebody might hurt their children. Yesterday, Kardashian announced she would pay for extra security at the school the couple’s kids attend, out of fear that somebody may retaliate against them in response to Kanye’s comments about Jews. Press coverage in Jew Mortimer Zuckerman’s Daily News places the blame for his children being in jeopardy entirely on West, as if his children should be punished for their father’s First Amendment-protected political speech.

Where this saga will end is up to the powers that be. Jews in America seek to control Blacks as a mindless vector of racial attack against White Gentiles and are preoccupied with keeping this secret relationship as covert as possible. Their “cancellations” are a little more surgical when an influential Black man calls them out.

What’s not in dispute is that Kanye’s actions have shaken all of the famous non-Whites in Judah’s pocket out of the tree. He is discrediting figures like Alexandria Ocasio-Cortez , who is currently teaming up with blackface-wearing open Jewish supremacist Dov Hikind to try and shut Kanye up.

If Kanye does not grovel before America’s holy shrine (the Holocaust museum), soon he will see speculative attacks on his businesses and wealth and all types of companies will begin dumping his music and products. He will be persona non grata throughout the entire information ecosystem (including social media), and people he thought were his friends will be disseminating embarrassing gossip and slanders about him.

Perhaps this doesn’t work. The next step will be to drag him off to the funny farm, a common tactic used in the Soviet Union against their political dissidents.

An avalanche of civil lawsuits and even a Department of Justice “investigation” into his taxes could follow. Acts of state-sanctioned vigilante violence are not off the table.

Through his comments, Kanye has committed the equivalent of a woman filming herself streaking through the streets while burning a Quran in Taliban-controlled Kabul.

But the power of the Jew lies in the ability to conceal it and thus prevent a conversation about it from ever materializing.

By baiting Jews into demonstrating their power out in the open, Kanye holds a strategic advantage.

Families Against Wall Street: We Stand With The Railway Workers!

President Joe Biden refers to himself as the “most pro-union president in history.” The Republican party purports to stand in defense of family values. Yet, as negotiations between railway unions and private carriers break down […]

The dominance of leftists and self-identified homosexuals in American institutions is set to accelerate even further, according to new data released by the Center for Partisanship and Ideology (CSPI). At Ivy League universities, surveys now […]